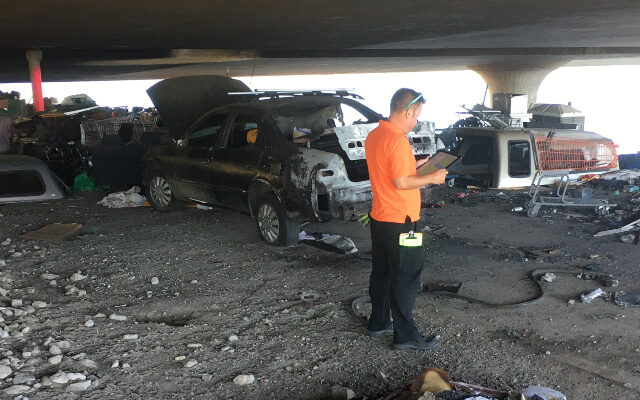 PORTLAND, Ore. — More than two dozen cars that were stolen or abandoned have been recovered or tagged for removal in Northeast Portland.

Last Thursday, North Officers partnered with @PBOTinfo on a focused mission for abandoned and stolen autos along NE Marine Dr and Airport Way. They recovered 8 stolen vehicles and towed another 8 and tagged 13 more for 72 hour notice. Thank you parking patrol for the help! pic.twitter.com/hiri5FiMxg

Police and parking patrol focused on Marine Drive and Airport Way last Thursday.  This particular area has a history of stolen vehicles being stashed.  Another 15 cars were recovered there earlier this month.

Yesterday, some Afternoon shift Officers came in early to conduct a mission to locate stolen vehicles on NE Marine Drive and Airport Way. They located 15 reported stolen vehicles taken from across the metro area. Some were drivable and some were nearly unrecognizable. pic.twitter.com/NvKQlKbHNI

The city has organized several missions over the past month to clean-up such areas across town.

This vehicle owner was very happy to get his pickup truck back. It had sustained some damage, but was drivable. Thanks to all the community members who cheered on the officers as they drove by encouraging the officers for their efforts. pic.twitter.com/6dgrikrxOe

Neighborhood Response Team Officers are assisting again with clean up in Delta Park. They checked 4 vehicles and 3 were stolen including this 2020 Ford F-150 pickup that is unrecognizable after being stripped. pic.twitter.com/8rltNdFAmT