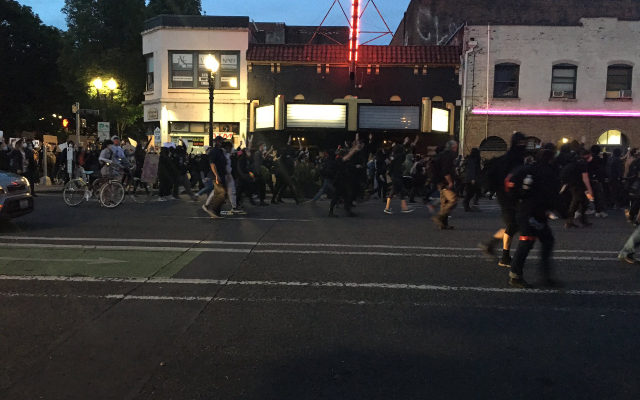 PORTLAND, Ore. — For the third straight night, protests of the death of George Floyd by police in Minneapolis turned violent in downtown Portland on Sunday evening.  Officers arrested 10 people.  Two adults and two juveniles were detained and released.

Two groups of demonstrators gathered near the Justice Center downtown and at Laurelhurst Park in Southeast Portland.  After an 8pm curfew imposed by Mayor Ted Wheeler for a second night, the second group marched from the park to the police bureau’s former Southeast Precinct at 47th and Burnside before making their way downtown, crossing the Burnside Bridge and meeting up with the first group outside the Justice Center.

Several thousand demonstrators gathered outside the Justice Center for several hours and police say the demonstration was largely peaceful.

Around 11:30pm, some of the demonstrators started throwing projectiles at officers at Southwest 3rd and Main.  After verbal warnings that the crowd was engaged in an unlawful assembly and that force would be used if the crowd did not disperse, riot control agents were deployed as the crowd threw several large aerial mortars at officers before the crowd finally dispersed.

“It has been a long, difficult and emotional several days in Portland and across the country and we understand why,” said Chief Jami Resch.  “Yesterday’s (Sunday) events started peacefully and there was a very organic moment when some of our Sergeants and demonstrators took a knee together next to the Justice Center.  I am proud of this moment, as it reflects community and understanding.

Sunday’s protests came on the heels of two days of protests.  At least 70 people were arrested on Friday and Saturday night.  Protesters shattered storefront windows and looted businesses.  The Multnomah County Justice Center was set ablaze on Friday night and at least two officers were injured.  Fires were set all over the area.  Portland Fire and Rescue crews responded to more than 230 calls on Friday night.