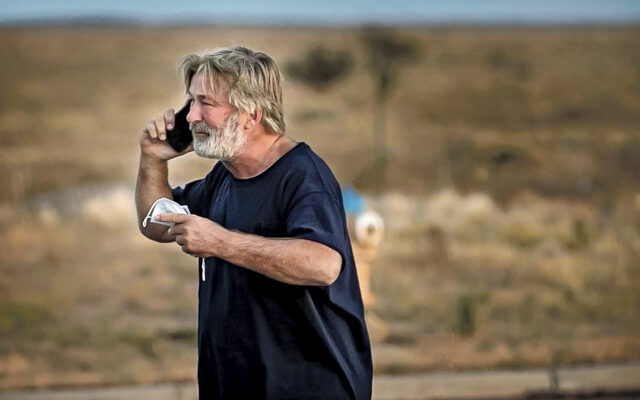 Alec Baldwin speaks on the phone in the parking lot outside the Santa Fe County Sheriff's Office in Santa Fe, N.M., after he was questioned about a shooting on the set of the film "Rust" on the outskirts of Santa Fe, Thursday, Oct. 21, 2021. (Jim Weber/Santa Fe New Mexican via AP)

LOS ANGELES (AP) – The family of a cinematographer shot and killed by Alec Baldwin on the set of the film “Rust” has agreed to settle a lawsuit against Baldwin and the movie’s producers, and production may resume on the project in January.

Matthew Hutchins, widow of the cinematographer Halyna Hutchins, says in a statement that a settlement agreement has been reached in the New Mexico lawsuit.

Matthew Hutchins says filming will resume on “Rust” in January, with the same principal players as before.

New Mexico regulators say the production company has failed to pay a fine for safety violations, and have scheduled a hearing for April.

Baldwin, Halyna Hutchins and others were setting up a shot inside a chapel on set when the gun he was holding went off in October 2021.