Wanted Man arrested after over 3 hour standoff with police 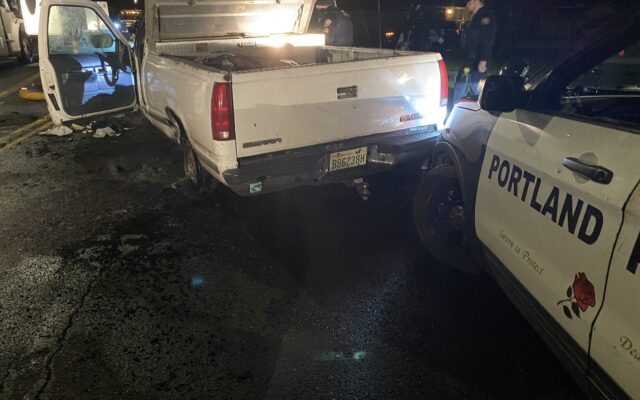 Portland Police arrested a man after allegedly after locking himself in his pickup truck and refusing to come out for nearly 3 1/2 hours.

Officers were called out Friday evening around 4:37 p.m. on of Southeast 114th Avenue near Holgate Blvd on a “report of a suspicious circumstances call where a wanted suspect was seen in the area.”

Officers say they were familiar with the suspect and that he was frequently armed with handguns.

According to police the man was wanted for domestic violence and firearms related crimes.

Officers found the man driving away in a pickup truck. As he approached the intersection of Southeast 112th Avenue and Southeast Bush Street officers surrounded the pickup truck.
Police say the man allegedly “suspect used his truck to attempt to ram his way out of the box-in, but was unable to escape.”

Officers say they tried to negotiate with the man to surrender, however he refused.

Police say at one point an officer pepper sprayed the man, but it did not have an effect.

Ultimately an armored vehicle was used to help officers get closer in order to communicate in a safe position.

According to Police, “The suspect’s tires were destroyed and the spinning wheels began digging into the pavement. ). There were so many sparks created that the officers were concerned the truck might catch fire.”

Police say tear gas was then used, which was effective.

Police say the man suspect got out and surrendered at about 7:56p.m.

Nobody was injured in the incident, police have not named the suspect as of yet.