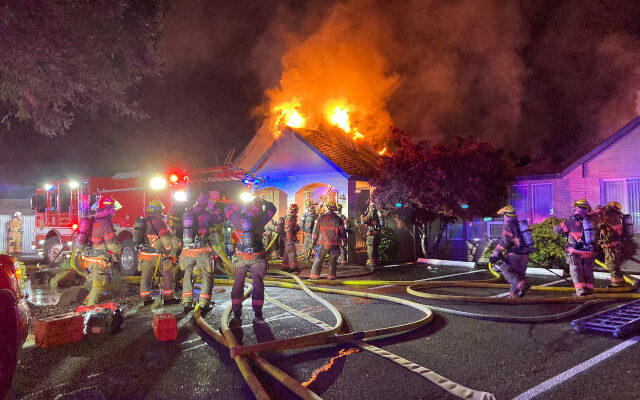 PORTLAND, Ore. — More than a dozen residents of a care home in Southeast Portland were rescued from a fire early Wednesday.

Firefighters say it was a “nightmare scenario” with heavy flames threatening the residents of the Hope N Care Residential Care Facility at Southeast 120th and Pardee in the dark of night.

An employee went door to door evacuating residents.  He was taken to the hospital to be treated for smoke inhalation.

“He quite honestly was a hero, somebody who was starting to pull victims out a building with lots of smoke,” said Terry Foster with Portland Fire.

Fire Chief Sara Boone praises the tactical decisions and valiant efforts which she says turned a near tragedy into an incredible success story.

Part of the roof collapsed, but did not injure anyone.  There’s no word on the cause of the fire, but investigators believe it started in the attic.

Last night crews battled a 4-alarm fire at a care facility in SE.

Truck 7 led the effort to evacuate 16 people with the help of Engine 29, Engine 25, facility staff, PPB and AMR.

This group effort prevented any loss of life. pic.twitter.com/VUotZmYC38