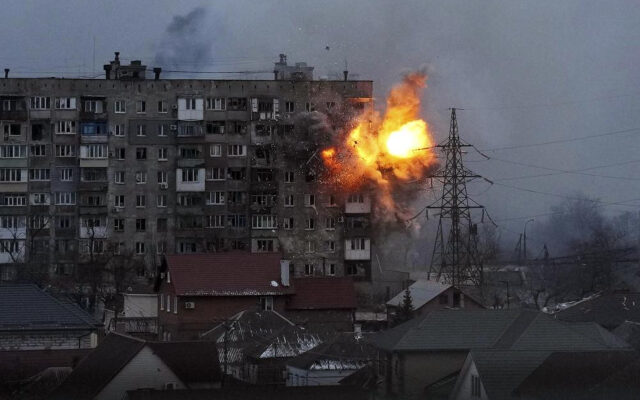 LVIV, Ukraine (AP) — Russia widened its offensive in Ukraine on Friday, striking airfields in the west and a major industrial city in the east, while the huge armored column that had been stalled for over a week outside Kyiv appeared to have spread out near the capital.

Military analysts were divided over whether the maneuvering by the Russian convoy signaled the imminent start of a siege of Kyiv or was just an effort to disperse some vehicles to more protected positions.

On the economic and political front, the U.S. and its allies moved to further isolate and sanction the Kremlin. President Joe Biden announced the U.S. will dramatically downgrade its trade status with Russia and also ban imports of Russian seafood, alcohol and diamonds. The move to revoke Russia’s “most favored nation” status was taken in coordination with the European Union and Group of Seven countries.

“The free world is coming together to confront Putin,” Biden said.

On the ground, the Kremlin’s forces appeared to be trying to regroup and regain momentum after encountering heavier losses and stiffer resistance than anticipated over the past two weeks. Britain’s Ministry of Defense said Russia is trying to “re-set and re-posture” its troops, gearing up for operations against Kyiv.

With the invasion in its 16th day, Russian President Vladimir Putin said there had been “certain positive developments” in Russia-Ukraine talks, but gave no details.

For his part, Ukrainian President Volodymyr Zelenskyy said Ukrainian forces had “reached a strategic turning point,” though he did not elaborate.

“It’s impossible to say how many days we will still need to free our land, but it is possible to say that we will do it,” he said via video from Kyiv.

He also said authorities were working on establishing 12 humanitarian corridors and trying to ensure food, medicine and other basics get to people across the country. Thousands of civilians and soldiers on both sides are believed to have been killed in the invasion.

So far, the Russians have made the biggest advances on cities in the east and south — including in Mariupol, the heavily bombarded seaport where civilians scrounged for food and fuel amid a harrowing 10-day-old siege — while struggling in the north and around Kyiv.

On Friday, Putin’s forces continued to launch airstrikes in urban areas such as Kyiv, Kharkiv and Mariupol, while also pounding targets away from the main battle zones.

Russia said it used high-precision long-range weapons to put military airfields in Lutsk and Ivano-Frankivsk in the west “out of action.” The attack on Lutsk killed four Ukrainian servicemen, the mayor said.

Russian airstrikes also targeted for the first time Dnipro, a major industrial hub in the east and Ukraine’s fourth-largest city, with about 1 million people. One person was killed, Ukraine said.

In images of the aftermath released by Ukraine’s emergency agency, firefighters doused a flaming building, and ash fell on bloodied rubble. Smoke billowed over shattered concrete where buildings once stood.

In another potentially ominous development for Ukraine, new satellite photos appeared to show that the massive Russian convoy outside the capital had split up and fanned out into towns and forests.

Howitzers were towed into firing position, and armored units were seen in towns near the Antonov Airport north of the city, according to Maxar Technologies, the company that produced the images.

The 40-mile (64-kilometer) line of tanks and other vehicles had massed outside Kyiv early last week. But its advance had appeared to stall amid reports of food and fuel shortages, muddy roads and attacks by Ukrainian troops with anti-tank missiles.

Mathieu Boulegue, a researcher at the London think tank Chatham House, said the redeployment means the long-awaited battle for Kyiv is just hours or days away. He predicted a drawn-out siege, not an immediate storming of the city.

But a senior American defense official said that while elements of the convoy have broken off and moved to the tree line, the U.S. believes those are efforts to hide and better protect the vehicles, which are largely for supplies.

The official, who spoke on condition of anonymity to describe the U.S. military assessment, said that the convoy hadn’t made any substantial progress toward the city and that the vehicles’ moves were not part of a tactical effort to advance on Kyiv.

However, the official said other forces from the northeast had moved closer to Kyiv and were about 20 to 30 kilometers (12 to 19 miles) east of the city center.

Repeated rounds of negotiations between Russia and Ukraine have taken place along the Belarus border, and the two countries’ foreign ministers held talks on Thursday with no apparent progress, while various third countries have also made attempts to broker a stop to the fighting.

A Western official, speaking on condition of anonymity to discuss intelligence matters, said the fact that negotiations are taking place so early in the fighting “might speak to Russian concerns” about the progress of the war.

In Syria, Russia backed the government in imposing long, brutal sieges of opposition-held cities, wreaking heavy destruction and causing widespread civilian casualties. That history, along with the siege of Mariupol, has raised fears of similar bloodshed in Ukraine.

Temperatures sank below freezing across most of Ukraine and were forecast to hit -13 degrees Celsius (8 Fahrenheit) in the eastern city of Kharkiv, which has come under heavy bombardment.

About 400 apartment buildings in Kharkiv lost heat, and Mayor Ihor Terekhov appealed to remaining residents to descend into the subway or other underground shelters where blankets and hot food were being distributed.

The bombardment continued in Mariupol, where a deadly strike on a maternity hospital this week sparked international outrage and war-crime allegations.

Repeated attempts to send in food and medicine and evacuate civilians from the city of 430,000 have been thwarted by continued attacks, and Ukrainian Deputy Prime Minister Iryna Vereshchuk put the number of dead there at more than 1,300.

Some 2.5 million people have fled Ukraine since the invasion began, according to the United Nations.

The United Nations’ political chief said the U.N. has received credible reports that Russian forces are using cluster bombs in Ukraine, including in populated areas. Cluster bombs scatter “bomblets” over wide areas. Their use against civilians is prohibited under international law.