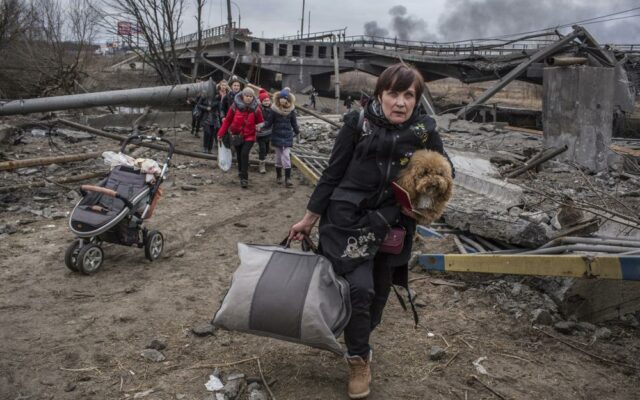 People cross an improvised path under a destroyed bridge while fleeing the town of Irpin, Ukraine, Sunday, March 6, 2022. In Irpin, near Kyiv, a sea of people on foot and even in wheelbarrows trudged over the remains of a destroyed bridge to cross a river and leave the city. (AP Photo/Oleksandr Ratushniak)

LVIV, Ukraine (AP) — Russia announced yet another cease-fire and a handful of humanitarian corridors to allow civilians to flee Ukraine starting Monday, although the evacuation routes were mostly leading to Russia and its ally Belarus, drawing withering criticism from Ukraine and others.

It was not immediately clear if any evacuations were taking place. Russian forces continued to pummel some Ukrainian cities with rockets even after the new announcement of corridors and fierce fighting continued in some areas, indicating there would be no wider cessation of hostilities.

Efforts to set up safe passages for civilians to leave besieged areas over the weekend fell apart. But the Russian Defense Ministry announced a new push Monday, saying civilians would be allowed to leave the capital of Kyiv, the southern port city of Mariupol, and the cities of Kharkiv and Sumy.

The two sides planned to meet for another talks Monday, though hopes are dim that a breakthrough is imminent. Their foreign ministers are also scheduled to meet in Turkey on Thursday, according to Turkish Foreign Minister Mevlut Cavusoglu.

Well into the second week of war, Russia’s plan to quickly overrun the country has been stymied by fierce resistance. Its troops have made significant advances in southern Ukraine and along the coast, but many of its efforts have become stalled, including an immense military convoy that has been almost motionless for days north of Kyiv.

The fighting has sent energy prices surging worldwide, stocks plummeting, and is threatening the food supply and livelihoods of people around the globe who rely on farmland in the Black Sea region.

The death toll, meanwhile, remains unclear. The U.N. has confirmed a few hundred civilian deaths but also warned the number is a vast undercount. Police for the Kharkiv region said Monday that 209 people have died there alone, 133 of them civilians.

The Russian invasion has also sent 1.7 million people fleeing Ukraine, creating what the head of the U.N. refugee agency called “the fastest-growing refugee crisis in Europe since World War II.”

Many others are trapped in cities under fire. Food, water, medicine and almost all other supplies were in desperately short supply in Mariupol, which an estimated 200,000 people were trying to flee. Russia and Ukraine have traded blame for the failure of a cease-fire there over the weekend.

In the latest cease-fire proposal, most of the evacuation routes were toward Russia or its ally Belarus, a move Ukrainian Deputy Prime Minister Irina Vereshchuk called “unacceptable.” Belarus served as a launching ground for the invasion.

“Humanitarian actors need to be able to intervene so we must get full cease-fires when they intervene,” Macron said. The issue won’t be solved via “corridors which are being threatened right away (by Russia),” he added.

The Russian task force said the new pledge for humanitarian corridors was announced at the request Macron, who spoke to Putin on Sunday. Macron’s office said he asked for a broader end to military operations in Ukraine and protections for civilians.

The Ukrainian government has proposed eight routes that would allow civilians to travel to western regions of Ukraine where there is no Russian shelling.

The Russian task force said the new pledge for humanitarian corridors was announced at the request of French President Emmanuel Macron, who spoke to Russian President Vladimir Putin Sunday. Macron’s office said he asked for a broader end to military operations in Ukraine and protections for civilians.

However, Kyiv Mayor Vitali Klitschko said in a Telegram video address that “fierce battles” continued Monday in the Kyiv region, notably around Bucha, Hostomel, Vorzel and Irpin — areas away from the humanitarian corridors — and were hitting civilians. Irpin has been cut off from electricity, water and heating for three days.

He did not provide details, but said the head of the town council of Hostomel, Yuriy Prilipko, was killed while distributing bread and medicine.

Meanwhile, Russian forces continued their offensive in Mykolaiv, opening fire on the city some 480 kilometers (300 miles) south of Kyiv, according to Ukraine’s General Staff. Rescuers said they were putting out fires caused by rocket attacks in residential areas.

“Russia continues to carry out rocket, bomb and artillery strikes on the cities and settlements of Ukraine,” the General Staff said, and repeated earlier Ukrainian accusations that the Russians have targeted humanitarian corridors.

The statement also accused Russian forces of taking women and children hostage and placing weapons in residential areas of cities — though it did not elaborate or provide evidence.

In the face of a series of punishing sanctions by Western countries, Russia has grown increasing isolated. The ruble has plunged in value, and the country’s extensive trade ties with the West have been all but severed. Moscow has also cracked down on independent reporting on the conflict and arrested anti-war protesters en masse. On Sunday more than 5,000 people in 69 cities were detained at, according to rights group OVD-Info — the highest single-day figure since the invasion began last month.

Ukrainian President Volodymyr Zelenskyy urged even more punishment on Monday, calling for a global boycott of all Russian products, including oil.

“If the invasion continues and Russia does not abandon its plans against Ukraine, then we need a new sanctions package,” Zelenskyy said in a video address. “If (Russia) doesn’t want to abide by civilized rules, then they shouldn’t receive goods and services from civilization. It can be called an embargo, or it can be just morality.”

Zelenskyy described shelling of Ukrainian cities in the center, north and south of the country, describing “terror” facing civilians in the suburbs of Kyiv and in Kharkiv and Mariupol, surrounded by Russian troops.

Putin earlier said Moscow’s attacks could be halted “only if Kyiv ceases hostilities.” As he has often done, he blamed Ukraine for the war, telling Turkish President Recep Tayyip Erdogan on Sunday that Kyiv needed to stop all hostilities and fulfill “the well-known demands of Russia.”

Putin launched his invasion with a string of false accusations against Kyiv, including that it is led by neo-Nazis intent on undermining Russia with the development of nuclear weapons.

British military officials compared Russia’s tactics to those Moscow used in Chechnya and Syria, where surrounded cities were pulverized by airstrikes and artillery.

“This is likely to represent an effort to break Ukrainian morale,” the U.K. Ministry of Defense said.

The handful of residents who managed to flee Mariupol before the humanitarian corridor closed Sunday said the city of 430,000 had been devastated.

“We saw everything: houses burning, all the people sitting in basements,” said Yelena Zamay, who fled to one of the self-proclaimed republics in eastern Ukraine held by pro-Russian separatists. “No communication, no water, no gas, no light, no water. There was nothing.”

Russia has made significant advances in southern Ukraine as it seeks to block access to the Sea of Azov. Capturing Mariupol could allow Moscow to establish a land corridor to Crimea, which Russia annexed from Ukraine in 2014 in a move that most other countries considered illegal.

The West has broadly backed Ukraine, offering aid and weapon shipments and slapping Russia with vast sanctions. But no NATO troops have been sent to Ukraine.

Zelenskyy has criticized Western leaders for not responding with more force to Russia. He appealed again on Monday for a no-fly zone over Ukraine or ”combat aircraft and air defenses that will give us the strength we need.”

“How do peaceful people in Kharkiv or Mykolaiv differ from (people in) Hamburg or Vienna?” Zelenskyy asked.

NATO so far has ruled out policing a no-fly zone because of concerns such an action would lead to a far wider war.