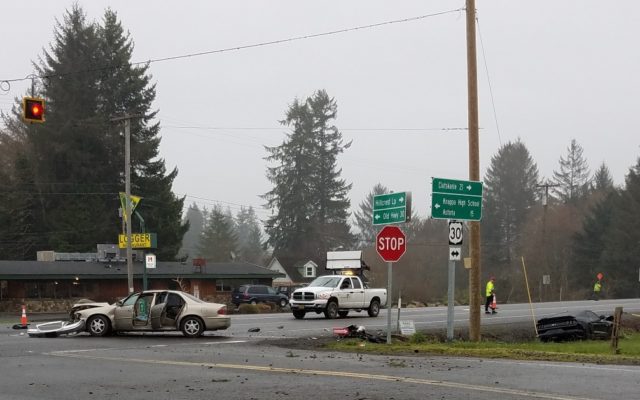 CLATSOP County, Ore. – The passenger who died in a t-bone crash on Highway 30 was from Astoria. He’s been identified has 24-year-old Enrique Sutphin. Oregon State police say early Saturday morning 20-year-old Myranda Schultz was trying to cross Highway 30, and pulled out in front of an oncoming car. That car was driven by 72-year-old Cameron Rowles from Warrenton. Sutphin died at the scene. The two drivers suffered minor injuries. It’s unclear if anyone’s facing charges.

On Saturday, February 22, 2020 at approximately 6:30 A.M., Oregon State Police Troopers and emergency personnel responded to a two vehicle crash on Hwy 30 near milepost 82.

Preliminary investigation reveals that a gold Buick Regal, operated by Myranda Schultz (20) of Astoria, had stopped at the Knappa intersection to proceed across Hwy 30 onto Hillcrest Loop.  Schultz pulled into the path of an eastbound black Ford Mustang, operated by Cameron Rowles (72) of Warrenton, and was struck on the passenger side.

Enrique Sutphin (24) of Astoria was a passenger in the Regal and sustained fatal injuries and was pronounced deceased.

Schultz and Rowles sustained minor injuries and were not transported to the hospital.