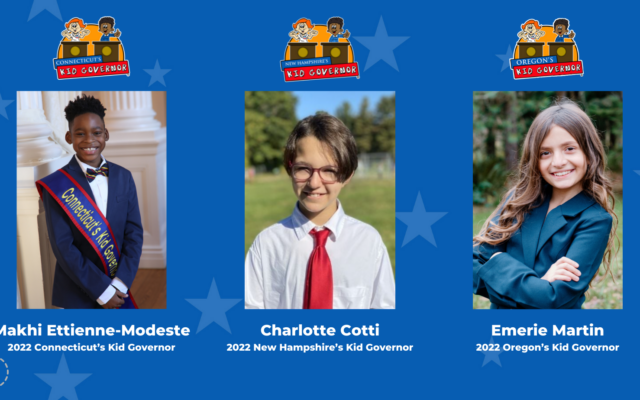 Emerie says she likes to solve problems, and that’s why she wanted to be the young “head of state”.   She ran on the platform of preventing animal abuse and plans to volunteer in animal shelters, organize fundraisers and supply drives, and stop people who have been convicted of animal abuse from adopting another animal.  She will work with her Cabinet, which is made up of the six finalists who ran for Oregon’s Kid Governor.

Three new governors have been elected in Connecticut, New Hampshire, and Oregon.

Kid Governor® is an award-winning civics program for fifth graders created by the Connecticut Democracy Center. The program teaches students about state government, voting, and civic engagement through a real statewide election for their state’s Kid Governor. Each fall, students in classrooms across the three states participate in civics lessons and activities and have the opportunity to nominate one student from their school to run for Kid Governor. Nominees work with their classmates to create a campaign video about a community issue important to them as well as a three-point plan designed to help other students take action on the issue.  In the end, seven statewide finalists advance to a statewide election and registered fifth-grade voters get to experience an authentic election by watching the finalists’ campaign videos, evaluating their platforms, and casting their ballots for the student who they want to be their next Kid Governor.