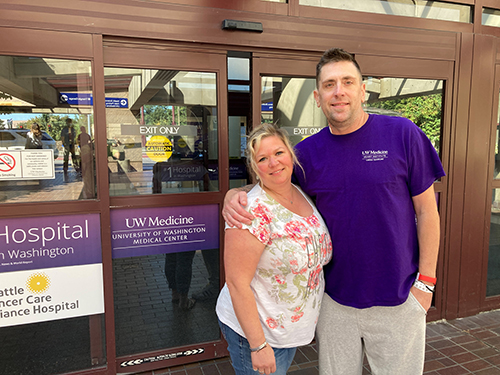 Seattle, Wash. (Jim Ferretti) — Ryan Stovall just turned 48 years old, but it almost did not happen.  The Beaver Creak man says last year he was working at a job site in Seattle, Washington.  One day he says he got really sick. “I thought I had pneumonia.” So he drove himself to a medical clinic to get checked out.  He says he almost didn’t make it there because he was too week, “They said my lungs were full of blood because my heart wasn’t pumping properly.  I was confused because I had never been in a hospital before so I called my wife and told her they’re keeping me overnight.”  A few hours later he says, he died.

He had a massive heart attack at the hospital.  He was quickly transferred University Of Washington Medical Center where he was revived. “Those guys, they saved me by my county six or seven times.” he said, “My heart was just done out of nowhere.”  Ryan had an Impella Heart Pump installed during a surgery.  He developed a serious infection and had to go through the procedure again.  He spent 62 days in the hospital, “And I got to leave with a battery or wall operated heart pump and was married to that thing for almost a year.”

Then came June of 2022 and Ryan suffered a stroke. “Because I had to be on heart thinners because of the heart pump, it created a brain bleed and I had a stroke.” That stroke moved him up on the transplant list which was a good thing because the doctors told Ryan, “I wouldn’t have lasted another month.”

In August, Ryan and his wife Misty got the call they had been waiting for, Ryan was going to receive a heart.  According to UW Medicine, the donor was from Montana, but unlike donors before, this person was not simply brain dead.  The heart was the Northwest’s first donation-after-circulatory-death (DCD) heart transplant.

The following is a transcript from UW Medicine and LifeCenter Northwest:

For decades, only donor hearts from patients who experienced brain death have been transplanted; hearts from patients who experienced circulatory death were deemed less predictable in terms of their long-term viability. The game-changer was technology that keeps blood and nutrients pulsing through donor hearts after recovery and during transit. It enables doctors to closely monitor the organs’ health and ensure suitability for transplant.

DCD transplants are possible when a family elects to withdraw ventilated support after death is imminent and the patient is a registered donor, or the family opts to move forward with donation. These transplants allow donors to gift more organs, so more patients’ lives can be saved.

“The recovery of this DCD heart is incredibly impactful as it is taking us to the future state of donation,” said Stacy McKean, director of organ procurement at LifeCenter Northwest. “Our team is excited to know that this is just the start of being able to save more lives.”

In this case, LifeCenter Northwest moved quickly to match the DCD heart from a Montana donor with a suitable recipient, synchronizing with UW Medicine transplant surgeons and coordinating with the team monitoring the Transmedics Organ Care System (OCS), which kept the heart beating during its trip from donor to recipient.

“The OCS allows us to measure markers of heart injury and function throughout the time that the heart is in the device. It gives us reassurance that a heart is in a good physiologic state before we transplant it,” said Dr. Maz Khorsandi, the surgeon who led Stovall’s transplant.

Research has shown that clinical outcomes of recipients of DCD hearts transported in the device have positive outcomes similar to recipients of hearts from brain-dead donors. In May the U.S. Food & Drug Administration approved the use of the OCS device with hearts donated after circulatory death.

Khorsandi recognized that DCD donation is only made possible through the generosity of patients and families.

“All transplants are limited by the supply of donor organs, so anything we can do to increase donor organs is important. LifeCenter’s efforts to have more people become donors and our efforts to accept a wider range of donor organs work in concert to serve patients like Ryan and get them transplanted sooner,” he said.

“I told them from the git-go, I don’t care which heart, I just want one.” Ryan said. “I did not find out about the new procedure until the night before surgery. I was like you know what? Let’s do it. I was just all for it.”

Ryan credits the doctors and nurses at UW Medicine for saving his life but he also gives a lot of credit to his wife Misty, “I really don’t think I would be here without her to be honest because she was there every step of the way.”

Ryan will stay in Seattle for a few more weeks before finally being healthy enough to come home to Beaver Creek in November. “I can’t wait! I mean being out in the country, we’re county people so we’ve got some acreage out in the middle of nowhere.  It’s just a whole different lifestyle up here because were pretty much right in the heart of Seattle.”  Which for an Oregon Duck fan, could be a nightmare! “We brought all of my Oregon Duck’s gear because this is obviously the University of Washington so everybody is Huskie or Cougar fans.” he said. “I’d be watching the Ducks game on the hospital T.V. and me and all the doctors and nurses go round and round talking junk ya know.”  But he says, he’s happy to have been saved by a group of Huskies. “They got me a purple t-shirt that says UW Heart Transplant and I actually wear it! I said this is the only way they’re going to get me in purple.  I told my wife I still don’t like their football team the Huskies are all right.”