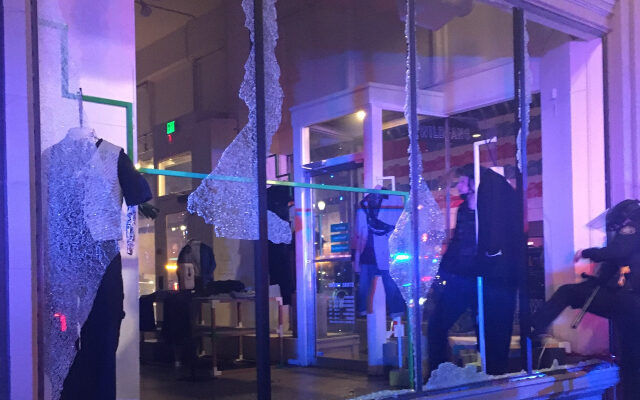 Portland, Ore. – In a new statement from Oregon Governor Kate Brown today she calls the destruction from last night’s riot in downtown Portland, acts of privilege. She says in part, two groups gathered last night. One demonstrated peacefully for hours. But unfortunately a second group of anarchist protesters, some armed, caused violence and vandalism.
Governor Brown added that she will continue to do everything in her power to keep the peace in Portland and make sure that people can make their voices heard safely.

“Two groups gathered in downtown Portland last night. One group demonstrated peacefully for hours by the waterfront. Their clarion call advocating for racial justice and Black lives has resonated with Oregonians and driven real reform over the past several months.

“Unfortunately, a second group of self-styled anarchist protesters, some armed, also marched downtown last night, with no discernible goal other than to cause violence and vandalism.

“They shattered the windows of a church that feeds Oregonians in need, a women-owned and operated business that raises money for immigrant and women’s rights, and many other storefronts.

“Indiscriminate destruction solves nothing. These are acts of privilege.

“At the request of the Joint Incident Command protecting free speech and keeping the peace in Portland, I activated the Oregon National Guard last night. These are Oregonians like you and me, who have volunteered their time and taken leave from their jobs and their families to keep the streets of Portland safe.

“For weeks, Oregonians have called for an end to the violence. I will continue to do everything in my power to keep the peace in Portland and make sure that people can make their voices heard safely.”