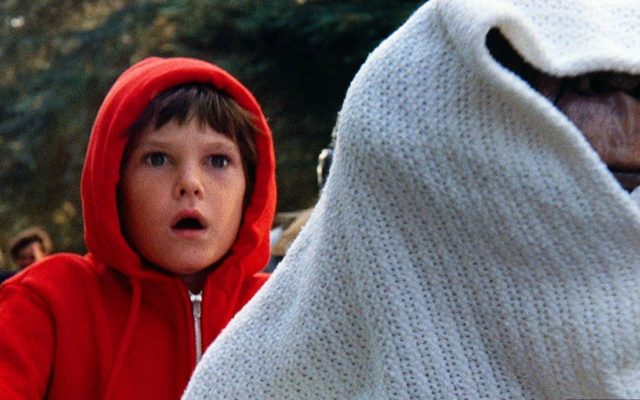 Did you know E.T. is a Jedi Master?  Neither did I until I walked into work this morning and had a meeting of nerdy minds with one of our producers.

The conversation started simply enough.  He asked me, “Coop, did you know E.T. was in ‘Star Wars: The Phantom Menace’?”

Now, the truth is…my producer was not referring specifically to the loveable alien creature we all saw in Steven Spielberg’s 1982 classic film.  Rather, he was referring to E.T.’s overall species, which you can see here — indeed — featured during a scene in “The Phantom Menace”.

As you can see, there are three of the little E.T.-like creatures there, apparently representing their home planet in Star Wars’ “Galactic Senate”.

Remember the part in E.T. where the loveable little alien notices someone dressed up as Yoda? (fast forward to the 2:24 mark)

Of course, you probably remember the most famous part of “E.T. The Extra-Terrestrial”…

Yanno, the part where E.T. waves his magical lighted index finger, giving the film’s young protagonist and his loyal friends the power to fly on their bicycles.

But really — here is the ACTUAL explanation of what happened with all the Star Wars & E.T. crossover stuff.  A quick hint;