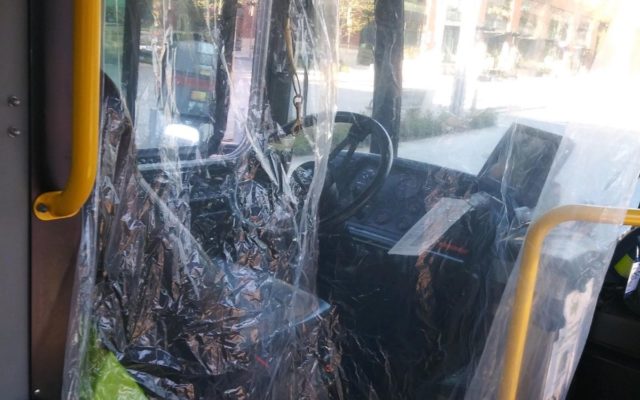 PORTLAND, Ore. – Longtime TriMet operator Scott Qazzaz has been told by TriMet management that he will not be allowed to keep his makeshift plastic shower curtain up while he drives his bus.

Scott tells KXL’s Brett Reckamp he began to become concerned about his safety on the job sometime in early March.  He said at some point the agency had given people gloves and masks to use on the job, but had not considered any type of physical barrier.

So, being a fairly handy guy, Scott decided to make his own.  He said he tinkered around with a few ideas and ultimately went with this dollar store version featuring plastic shower curtains.  He said he would bring it with him for his shift and take it home afterwards.  At some point, TriMet became aware of the curtain and made him take it down.

On Tuesday, Scott began having some text conversations with Brett.  One of them read:  “We are all in this together (you, me, trimet, the world)  trying to slow and stop the spread of the virus; My plastic barrier is part of that effort.  I see no conflict of interest.”  Scott also said he was a 26-year veteran driver and even though he did have some fear speaking publicly, he felt it was important to be a leader and try and protect all of his friends and co-workers.  After several days of thinking it over, Scott spoke to Brett with a message late Wednesday, you can hear his comments by clicking at the bottom of this article.  He also spoke to other media outlets who have published and ran stories.

TriMet has since reportedly begun installing barriers between drivers and riders.  Of their approximate 700 fleet buses, they say they have installed them in about half, and intend to have all their buses outfitted by the end of July.

KXL reached out to TriMet prior to airing news stories on Thursday afternoon.  Below is their written response:

“We appreciate that our bus operators and other frontline staff are out there providing a vital service for the communities essential workers and others who must travel right now, while much of the rest of the world has just stopped. We understand their concerns as it is a frightening time, especially for those who must interact with others. That’s why TriMet has been working closely with state and regional health experts to provide the best guidance we can to our employees and our riders. For weeks now, we have encouraged riders and employees alike to follow the precautions laid out by the CDC including frequent hand washing, not touching your face with unwashed hands and staying home if sick.

As COVID-19 was first detected in the U.S., TriMet began trying to purchase hygiene and disinfectant products, PPE and other supplies to help keep our employees healthy. However, due to the worldwide shortage, and supplies understandably going first to doctors and nurses helping sick patients, we saw our orders canceled or go unfilled. Despite that, we did allow operators and staff to use gloves and masks that they were able to personally obtain. Our general manager reinforced that in an email to all employees on March 20.

Initially we followed the direction of the Centers for Disease Control that masks were only for those who were sick and for health care workers. However, as we began to hear that the thinking about mask use for prevention may be changing, and we received a limited number of masks, we began distributing masks to frontline staff on April 3, prioritizing masks to operators first. Since then, we have had more masks and face coverings come in and late last week we distributed multiple masks for each operator. Yesterday, we distributed more face coverings, making available six for each operator. These were among the 10,000 masks that I mentioned in our email update Tuesday. As was also mentioned, TriMet is pursuing many avenues for reusable, washable cloth face coverings for our frontline staff.

We did have an operator who began his day with a mask, but subsequently did not have it for later runs and put up a shower curtain as he felt that would better protect him, since the bus he was driving did not have a safety panel. The shower curtain posed a serious safety concern as it could impair his ability to see to the side. That could have led to a collision with an auto, pedestrian, bicyclist or a rider approaching the bus as it pulled away from a stop. A rider reported the concern to TriMet. A supervisor met with the operator and asked him to take the curtain down for his safety, the safety of his riders and the community. The supervisor gave the operator a mask to ensure he had one readily available.

As I mentioned Tuesday, half of our 700+ buses have safety panels. All new buses come with the panels installed. We’ve been retrofitting the older buses to put in safety panels and in March, TriMet authorized $2.7 million to speed up the installation. We are quickly procuring panels and will retrofit the rest of our bus fleet by the end of July.”