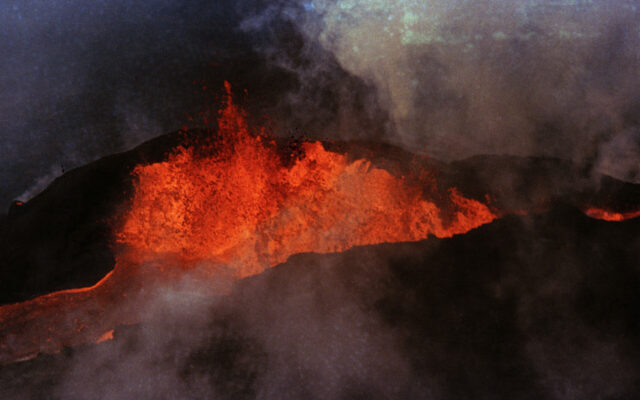 FILE - Molten rock flows from Mauna Loa on March 28, 1984, near Hilo, Hawaii. Hawaii officials are warning residents of the Big Island to prepare for the possibility that the world's largest active volcano may erupt given a recent spike in earthquakes at the summit of Mauna Loa. Scientists don't expect the volcano to erupt imminently, but officials are reminding people lava could reach some homes in just a few hours when it does. (AP Photo/Ken Love, File)

HONOLULU (AP) – Hawaii’s Mauna Loa, the world’s largest active volcano, has started to erupt for the first time in nearly four decades, prompting volcanic ash and debris to fall nearby.

The U.S. Geological Survey says the eruption began late Sunday night in the summit caldera of the volcano on the Big Island.

Early Monday, it said lava flows were contained within the summit area and weren’t threatening nearby communities.

The agency warned residents at risk from Mauna Loa lava flows should review their eruption preparations.

Scientists had been on alert because of a recent spike in earthquakes at the summit of the volcano, which last erupted in 1984.