Fights Break Out In Downtown Between Trump Supporters & Counter Protesters 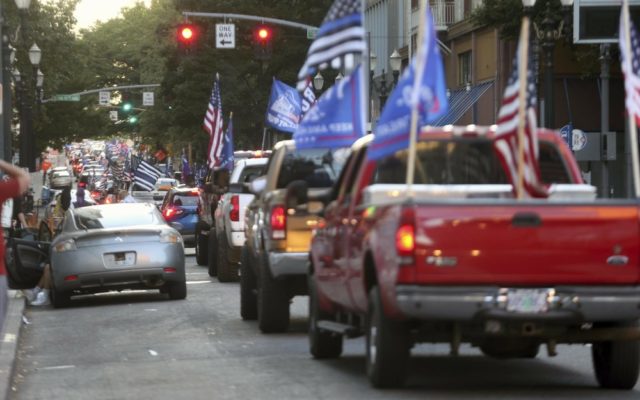 PORTLAND, Ore. (AP) — Fights broke out in downtown Portland Saturday night as a large caravan of supporters of President Donald Trump drove through the city, clashing with counter-protesters.

Oregon’s largest city has been the site of nightly protests for three months since the police killing of George Floyd in Minneapolis.

Police said they had made several arrests Saturday night.

The caravan of about 600 vehicles headed for downtown after a late afternoon rally in the parking lot of the Clackamas Town Center shopping mall. Many of the rally-goers waved Trump flags.

“This rally is not a protest,” Alex Kyzik, an organizer, told the crowd, according to the Oregonian/Oregonlive.com. “This rally is a celebration of a great president.”

he caravan left for downtown about 5:15 p.m.

They were greeted by Black Lives Matter protesters who had gathered downtown for their own rally. Video showed sporadic fighting, as well as Trump supporters firing paintball pellets at opponents as counter-protesters threw things at the Trump caravan.

“There have been some instances of violence between demonstrators and counterdemonstrators,” Portland Police said via Twitter. “Officers have intervened and in some cases made arrests.”

Saturday’s rally was the third consecutive weekend that pro-Trump demonstrators converged in and around Portland, leading to clashes with counter protesters, the Oregonian/Oregonlive.com reported.

The Black Lives Matter demonstrations usually target police buildings and federal buildings. Some protesters have called for reductions in police budgets while the city’s mayor and some in the Black community have decried the violence, saying it’s counterproductive.

Early Saturday morning, fires set outside a police union building that is a frequent site for protests prompted police to declare a riot.

An accelerant was used to ignite a mattress and other debris that was laid against the door of the Portland Police Association building, police said in a statement. At least one dumpster had also been set on fire in the street nearby.

The commotion followed a sit-in in the lobby of the Portland mayor’s condominium building Friday night.