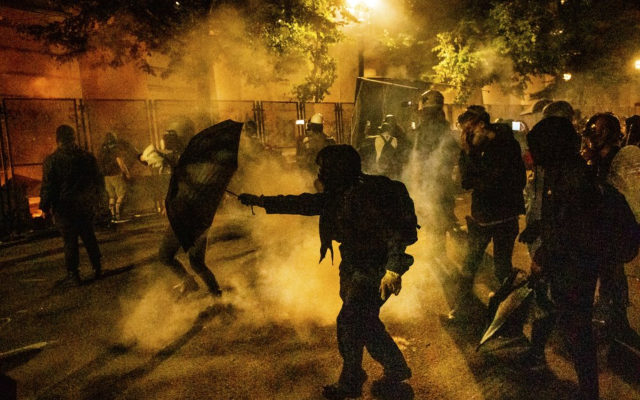 PORTLAND, Ore. — Federal charges were announced Thursday afternoon against 74 people in the Portland demonstrations.  Federal agents have arrested 100 people in the city since the end of May.

The U.S. Attorney’s Office is working with local and state law enforcement to identify, arrest, and prosecute individuals involved in criminal activity.  Those facing charges are accused of assaulting federal officers, damaging property, setting fires and not obeying lawful orders.

The majority of the people facing charges are local residents.  The crimes they are charged with come with sentences of 5 to 20 years.

“While the FBI supports and safeguards Constitutionally-protected activity and civil rights, there is no permit for assault, arson or property damage and these are not victimless crimes,” said Renn Cannon, Special Agent in Charge of the FBI in Oregon.

Authorities are still looking for those involved in criminal activity at the Multnomah County Justice Center overnight and the Chase Bank at Southwest 6th and Yamhill on the night of May 29th and early morning on May 30th.

The FBI is asking for tips “to help identify actors who are actively instigating violence in the city of Portland”.  Tips may be submitted at fbi.gov/PDViolence.