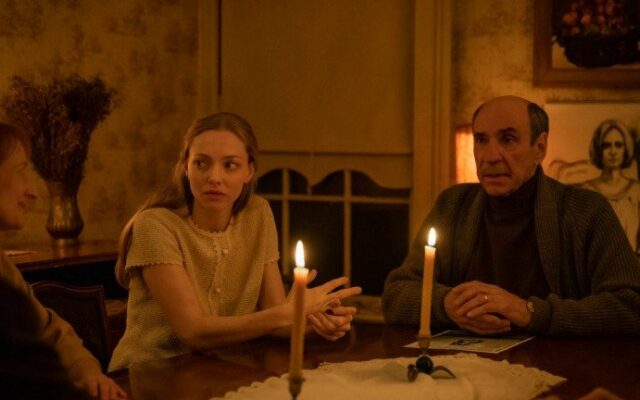 In Brief: F. Murray Abraham gets cast a lot as a villain. In real life, he’s charming, funny and very thoughtful.

F. Murray Abraham is one of my favorite character actors. His work in Amadeus is one of the greatest acting jobs in the history of movies. He and Tom Hulse did one of the two best tandem acting gigs in the history of movies. The other is Dustin Hoffman and Jon Voight for Midnight Cowboy. No two-part-focused films have come close to those two films.

The movie is Things Heard & Seen. Abraham is cast as a good guy. And he’s as good at being a good guy as he is as a villain. The movie is a ghost story. Ghost story movies these days all look pretty much the same. Once in awhile one comes along that moves the needle a bit. Things Heard & Seen gives it a push. Writers and directors, Shari Springer Berman and Robert Pulcini plunk a psychopath and a family into a house full of ghosts in a village in New York.

F. Murray Abraham and I talk about the movie, about life, humor, laughter…oh…and about acting.

Click here to read my review of Things Heard & Seen.

Rated R for language, violence, brief nudity and mature themes. A hauntingly good haunted house story with a not-so-hot and not-so-haunting ending. The beginning and the middle more than make up for a bad ending.

You can see Things Heard & Seen exclusively on Netflix.