Your Favorite Waterfall in the Gorge?

The Gorge has the greatest concentration of waterfalls in North America, especially on the Oregon side. Washington has fewer because it’s drier, since that side of the gorge faces south and receives more sunlight. Also, what’s under your feet comes into play. Not to get all “Geeky Geologist” on you, but the Washington side is an unstable “layer cake” of dense basalt on top of softer layers and it tilts to the south as it follows the buried slope of an extinct volcano. Landslides reduce the slope there and that means fewer vertical drops—thus fewer waterfalls. HOWEVER, one of the most beautiful waterfalls I’ve seen in the Gorge so far is Panther Creek Falls. It’s a 130 waterfall in the Wind River Valley in Skamania County. It’s super unique with two drops, instead of one, and you can get super close, and maybe that’s why it’s so amazing. 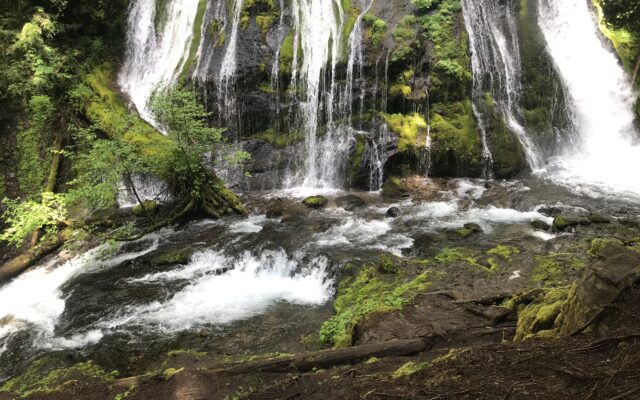 Getting there itself is a little tricky. It’s in U.S Forest Service land, and there aren’t a lot of signs. If you go, whether you take 84 and cross over at the Bridge of the Gods, or via WA 14, you’ll pass through the town of Carson on the Wind River Highway. Google will get you there, but there are no signs saying ‘falls this way”, except that message is painted on the side of the road at the small parking lot nearby. As I said, it’s a little tricky to find the trail, but so well worth it!

The trail itself is pretty short, maybe a quarter mile each direction. The best view is from the bottom of the falls, but there’s a little bit of elevation and once you get to the falls there are signs warning you not to leave the trail because of the danger.  The water is moving incredibly fast! 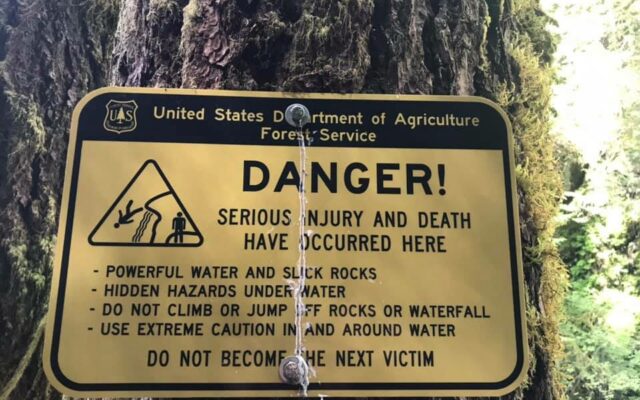 Panther Creek has some rugged camping areas, and is pretty far out into the wilderness. Goose Lake is just a few miles away. There are a lot of unmarked forest service roads in the area, and some snow covered mountain peaks to see. It’s also near the Big Lava Beds, which is part of the Indian Heaven volcanic field. If you are thinking about going there know this: there are no roads or trails

The Big Lava Bed, located in the Gifford Pinchot National Forest in the southwestern area of the State of Washington, originated from a 500-foot-deep crater in the northern center of the bed. The Big Lava Bed is the youngest feature of the Indian Heaven volcanic field. The 0.9-cubic kilometer lava flow erupted from the cinder cone about 8200 years ago. The lava flow traveled 13 km from the source crater. Lodgepole pine, alder, and other pioneer plants struggle to grow, seen sparsely growing between and amid towering rock piles, caves, and strange lava formations. Access into the interior of the lava bed is difficult, since there are no roads or trails crossing the lava field. Explorers who wish to venture deep within the lava flow are advised to choose their route carefully. Compasses are not always reliable, since local magnetic influences affect their magnetic performance in the vast expanse of rock.[5] 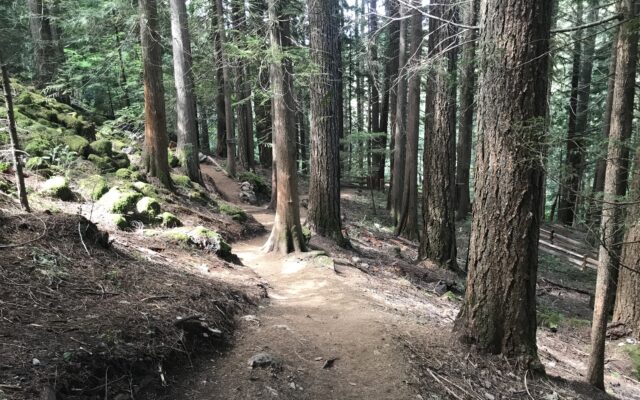