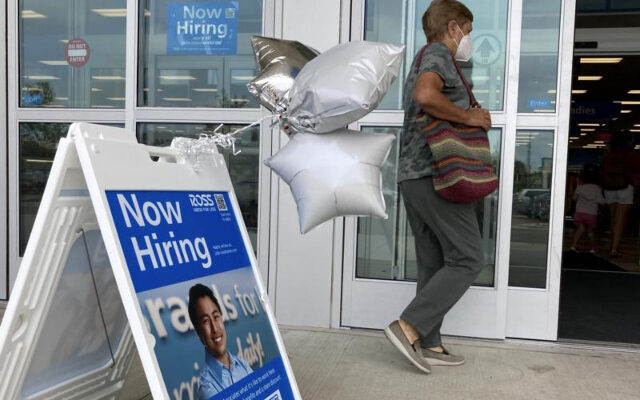 WASHINGTON (AP) — Hiring surged in July as American employers added 943,000 jobs and the unemployment rate dropped to 5.4%, another sign that the U.S. economy continues to bounce back with surprising vigor from last year’s shutdown.

The July numbers exceeded economists’ forecast for more than 860,000 new jobs. The Labor Department also revised its jobs numbers for May and June, adding another 119,000 jobs.

The economy and the jobs market, however, face a growing threat from the coronavirus’ highly contagious delta variant. The Labor Department collected its data for the report in mid-July before the Centers for Disease Control last week reversed course and recommended that even vaccinated people resume wearing masks indoors in places where the delta variant is pushing infections up.

Hotels and restaurants, hard-hit at the height of the pandemic, are fully open again and doing brisk business. They added 327,000 jobs last month.

As businesses scramble to find workers as customers come back, they’ve raised wages: Average hourly earnings were up 4% last month from a year earlier, especially impressive because so many of the new jobs came in the low-wage leisure and hospitality sector.

The number of people who reported they had jobs surged by 1 million, most since October, pushing the jobless rate down from 5.9% in June. Encouraged by their prospects, 261,000 people returned to the job market in July.

The coronavirus pandemic triggered a brief but intense recession last spring, forcing businesses to shut down and consumers to stay home as a health precaution. The economy lost more than 22 million jobs in March and April 2020. Since then, though, it has recovered nearly 17 million jobs, leaving a 5.7 million shortfall compared to February 2020.

“If the pace of hiring over the last three months continues, all jobs lost due to the pandemic would be regained in seven months,” Leslie Preston, senior economist at TD Economics, wrote in a research report. “However, the pace is likely to cool a bit and the risk of the delta variant looms.”

The outlook for the jobs market and the economy is clouded by a resurgence of COVID-19 cases caused by the spread of the highly contagious delta variant. The United States was reporting an average of more than 98,000 new daily cases as of Thursday, up from fewer than 12,000 a day in late June — although still well below the 250,000 level of early January.

The majority of new cases are among people who have not yet been vaccinated. The rollout of vaccines helped encourage businesses to reopen and consumers to return to shops, restaurants and bars that they had shunned for months after the pandemic struck. Many Americans are also in surprisingly strong financial shape because the lockdowns allowed them to save money and bank relief checks from the federal government.

As a result, the economy has bounded back with unexpected speed. The International Monetary Fund expects U.S. gross domestic product — the broadest measure of economic output — to grow 7% this year, its fastest pace since 1984.

Employers are advertising jobs — a record 9.2 million openings in May — faster than applicants can fill them.

Some businesses blame generous federal unemployment benefits — including an extra $300 a week tacked on to regular state jobless aid — for discouraging Americans from seeking work. In response, many states have dropped the federal unemployment assistance even before it is scheduled to expire nationwide Sept. 6.

Many Americans may be staying out of the job market because of lingering health fears and trouble obtaining childcare at a time when many schools are closed.