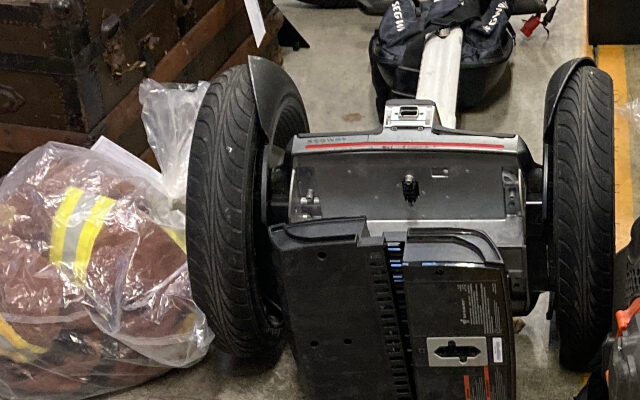 PORTLAND, Ore. — A group of thieves have been arrested for stealing property from homes and businesses in inner Southeast Portland.  The Portland Police Neighborhood Response Team has spent the past month investigating the series of burglaries.

A search warrant was issued and more than 70 stolen items were seized from a home on Southeast 14th near Madison Street last week.

The suspects are accused of stealing the Segway and firefighter turnout coat pictured above.  Other items include a firearm, electric motorcycle, industrial equipment, key cutter, and several dozen forged and fraudulent checks and financial documents.  One home was broken into several times with a vehicle and numerous collectible heirlooms stolen.

Two people were arrested.  35-year-old Jay Lamb is charged with theft, theft by receiving and burglary.  27-year-old Karen Brown was arrested on two felony warrants.  Additional charges are expected against both.

Two others, 45-year-old Jeffrey Garder and Koy Hill, 52, were cited for outstanding warrants.

Investigators are asking for help identifying the owners of the recovered property.  Anyone with information is asked to email [email protected], Attention: Central NRT.