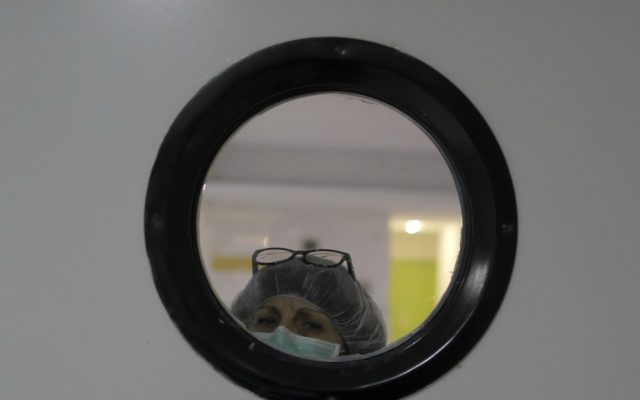 A health worker wearing a face mask to protect from coronavirus, looks out of from a window at a nursing home in Madrid, Spain, Tuesday, March 31, 2020. The new coronavirus causes mild or moderate symptoms for most people, but for some, especially older adults and people with existing health problems, it can cause more severe illness or death. (AP Photo/Manu Fernandez)

MADRID (AP) — Spain’s coronavirus deaths jumped by a record number Tuesday as the country’s medical system strained to care for its tens of thousands of infected patients, and Italy opened a 200-bed field hospital at a fairgrounds in Milan to ease the pressure on overcrowded intensive care units.

As worldwide infections soared past the 800,000 mark, New York’s governor begged for health care reinforcements, saying up to 1 million more workers were needed. The World Health Organization warned the pandemic is “far from over” in Asia even if the epicenter has shifted.

Spain and Italy struggled to avoid the collapse of their health systems, with Spain saying hospitals in at least half of its regions are at or very near their ICU bed limits.

Overnight, Spain recorded 849 new deaths, the highest daily toll since the pandemic hit the southern European country. It has now claimed the lives of 8,189, forcing Madrid to open a second temporary morgue after an ice rink pressed into service last week become overwhelmed.

Dozens of hotels across Spain have been turned into recovery rooms for patients in less-serious condition, and authorities are building field hospitals in sports centers, libraries and exhibition halls.

Authorities are moving breathing machines to regions with the highest number of ICU patients, and moving the patients themselves “has not been ruled out,” said Dr. María José Sierra of Spain’s health emergencies center.

In northern Italy, the intensive care field hospital, built in 10 days, was unveiled at the Milan fairgrounds to help ease pressure on the health care system.

“We made a promise and we kept it,” said the head of the project, former civil protection chief Guido Bertolaso, who ended up catching the virus while on the job and had to work from his hospital bed.

Italy and Spain account for more than half of the 38,714 COVID-19 deaths reported worldwide and the U.S. has the most confirmed cases at 164,610, according to a tally by Johns Hopkins University.

Dr. Takeshi Kasai, the WHO’s regional director for the Western Pacific, cautioned, however, that the risk in Asia and the Pacific “will not go away as long as the pandemic continues.

“This is going to be a long-term battle and we cannot let down our guard,” Kasai said. “We need every country to keep responding according to their local situation.”

A 12-year-old girl became the youngest person to die in Belgium, which has counted 705 deaths so far, including 98 in the last day. It was not disclosed whether she suffered from any underlying condition. The country of about 11.5 million people has reported more than 12,705 infections.

National crisis-center coronavirus spokesman Emmanuel Andre said Belgian authorities expect the disease to reach its peak in coming days, and that “we will arrive at a point where we’re close to saturation point at our hospitals.”

Russia registered 500 new confirmed cases in the biggest spike since the start of the outbreak, bringing its total to 2,337. Moscow has been on lockdown since Monday and many regions and cities have ordered similar restrictions.

According to measures passed by lawmakers, evading quarantine will be punishable by heavy fines or, if it leads to two or more people dying, by up to seven years in prison. Heavy fines are also outlined for those who spread misinformation about the outbreak, or up to five years in prison if it results in a death.

In New York, the epicenter of the U.S. outbreak, Gov. Andrew Cuomo and health officials warned that the crisis unfolding there is just a preview of what other U.S. cities and towns will soon face. New York state’s death toll climbed by more than 250 people in a day to over 1,200.

Even before the governor’s appeal, close to 80,000 former nurses, doctors and other professionals were volunteering in New York, and a Navy hospital ship arrived with 1,000 beds to relieve pressure on the city’s overwhelmed hospitals.

California officials put out a similar call for volunteers as coronavirus hospitalizations doubled over the last four days and the number of patients in intensive care tripled. 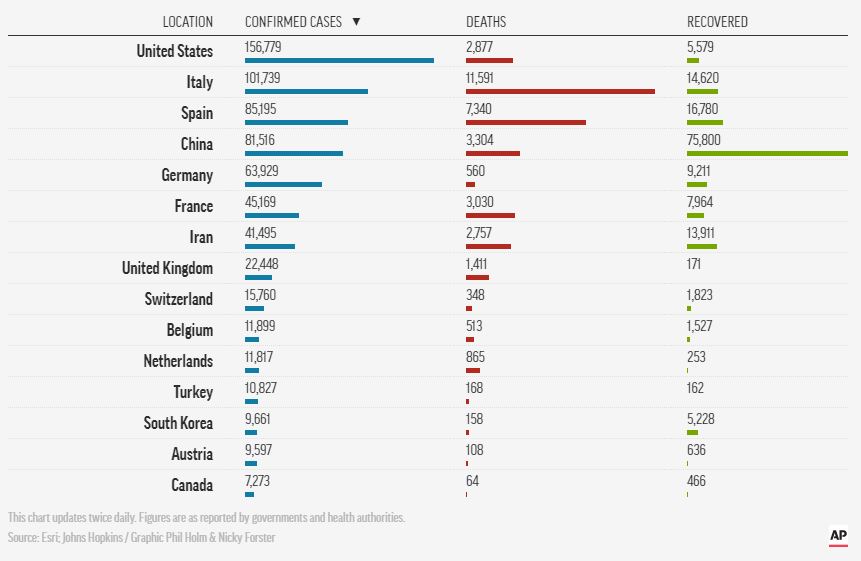 Experts maintain the pandemic will be defeated only by social distancing measures that have locked down billions of people and upended the world’s economy.

In the southern state of Florida, officials were meeting later Tuesday to decide whether to let the infection-plagued cruise ship Zaandam dock after more than two weeks at sea. In a South American dream trip that turned into a nightmare, dozens on the ship have reported flu-like symptoms and four people have died. The company said eight people have tested positive but 2,300 other passengers and crew are in good health.

Florida Gov. Ron DeSantis has said the state’s health care resources are stretched too thin to allow the ship to dock.

More than 235 million people — about two of every three Americans — live in the 33 states where governors have ordered or recommended that residents stay home.

Worldwide, 801,400 people have been infected and 170,325 have recovered, according to Johns Hopkins University.

For most people, the coronavirus causes mild or moderate symptoms, such as fever and cough. But for others, especially older adults and people with existing health problems, it can cause severe symptoms like pneumonia and even death.

China on Tuesday reported just one new death from the coronavirus and 48 new cases, claiming that all new infections came from overseas. In Wuhan, people were ready to jump, cry and “revenge shop” as the Chinese city once at the center of the outbreak reopened.

About 75% of the shops reopened at the Chuhe Hanjie pedestrian mall. Shopkeepers limited the number of people allowed in, dispensing hand sanitizer and checking customers for signs of fever.

In Serbia, Hungary and other nations, concerns were rising that populist leaders were using the situation to try to seize more power and silence critics.

A human rights expert said while she understands the need to act swiftly to protect lives, the new states of emergency must include time limits and parliamentary oversight.

“A state of emergency — wherever it is declared and for whatever reason — must be proportionate to its aim, and only remain in place for as long as absolutely necessary,” said Ingibjörg Sólrún Gísladóttir of the Organization for Security and Cooperation in Europe.

The economic devastation continued, with British Airways suspending all its flights at Gatwick Airport amid a collapse in demand as nations close borders and airlines slash flights.

In Japan, the countdown clocks were reset and ticking again for the Tokyo Olympics. The clocks now read 479 days to go, with the games scheduled to begin on July 23, 2021. 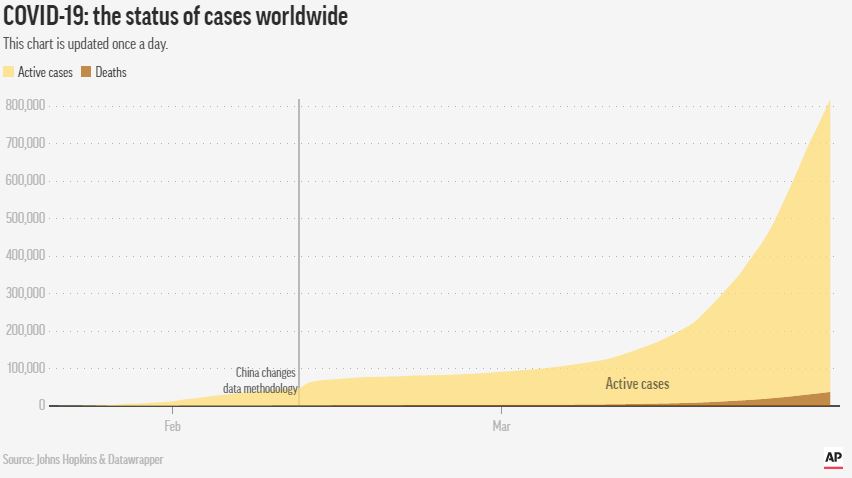