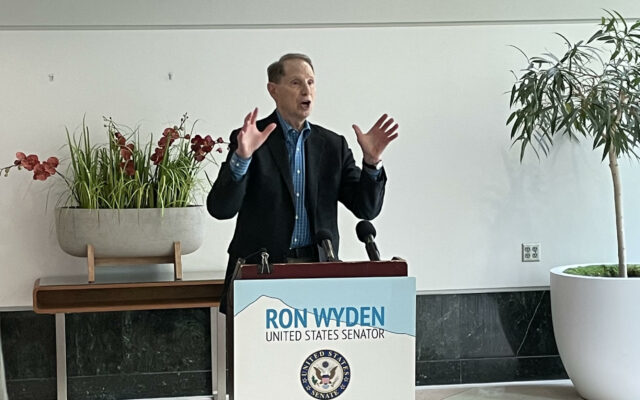 Portland, Ore. – Oregon Senator Ron Wyden held a press conference in Northeast Portland regarding the mass shooting in Uvalde, Texas. He began by blasting leaders of the Republican Party who are attending a National Rifle Association convention in Houston, calling it “a shameless gathering of death.”

He then switched his message to one of unity, calling on leaders from both sides of the aisle to find common ground to pass new legislation to decrease gun violence. Adding that he supports gun ownership by law abiding citizens.

“The question of common sense gun reform is not an either-or proposition. We can protect the rights of gun ownership for law abiding people, but we got to have a new measure of safety to prevent gun violence from criminals,” Wyden said. “I’m talking about reforms like universal background checks, raising the age to buy guns, limiting guns on campuses, banning assault weapons and making sure domestic terrorists don’t have access to guns.”

Wyden recognizes many citizens may be skeptical that anything will change this time around, as meaningful gun legislation has failed to pass after a number of mass shootings in the last decade, including after the Sandy Hook Elementary School shooting where 20 children and six adults were killed. But says this time he’s hopeful that this “grassroots anguish over these atrocities” won’t lose momentum, and there will be changes.

“I believe these next 10 days are going to be some of the most important in the history of the drive to find common ground for common sense gun safety,” Wyden said, adding he is going to use the Memorial Day recess to host five virtual townhalls to discuss what can be done with his constituents, and gun rights activists. He also plans to meet with other U.S. Senators.

Another reason Wyden is hopeful that this time around things will be different is because he believes recently, some more staunch supporters of gun rights, are changing their feelings.

“I think attitudes for commons sense gun safety are really changing in rural Oregon,” Wyden said. “Kids come up to me and say, we grew up with guns, we love to hunt and fish and being out with our folks. But we got to protect families, and kids and our community.”

Wyden and his staff are specifically focusing on legislation to stop a certain type of criminal from owning firearms.

“I don’t think people who have been convicted of domestic violence should be able to have those guns. Or when they have a restraining order (against them).”

Wyden says he is also working on a major, bipartisan mental health package to hopefully give more people access to the help they need before they turn to violence.

“Senator Mike Crapo (R-ID), senior republican on the finance committee, joined with me in proposing a major mental health package to really strengthen what this country does in that area,” Though Wyden added, this doesn’t serve as a replacement for new, meaningful gun legislation. “I’m all in on beefing up mental health services, focusing on schools, getting additional counselors. I just don’t want anyone to walk away with argument that, that’s somehow the entire solution.”

The senator concluded by saying he doesn’t think the questionable response time from Uvalde changes the necessity for more protections against gun violence. Though he does support a federal investigation into the matter.

“One of the questions I want to look at is, were there federal funds involved in someway in this whole security arrangement,” Wyden concluded.

The event took place right next to a daycare, so Wyden had this to say

“Sometimes they go on these cool little walks and wave to me. What that’s all about, when they’re out there with their caregivers here in our hometown, is that we owe them their future. The memories of far too many young people, and Oregonians, and nationwide, who’ve had their futures ripped from them by gun violence ought to be on our minds today.”