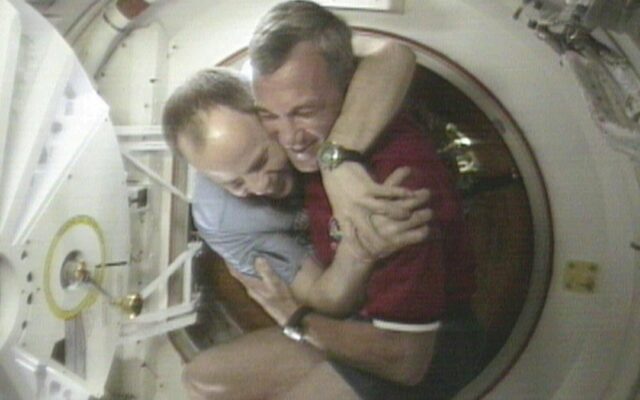 FILE - Shuttle Commander Terrence Wilcutt, right, and Mir Commander Anatoly Solovyev, left, hug after opening the hatches between the space shuttle Endeavour and the Russian Space station Mir Saturday, Jan. 24, 1998 in this image from television. Russia will opt out of the International Space Station after 2024 and focus on building its own orbiting outpost, the country's newly appointed space chief said Tuesday, July 26, 2022. (NASA via AP, File)

MOSCOW (AP) – Russia’s space chief says the country will opt out of the International Space Station after 2024 and focus on building its own orbiting outpost.

Yuri Borisov, who was appointed earlier this month to lead the state-controlled space corporation Roscosmos, said during Tuesday’s meeting with Russian President Vladimir Putin that Russia will fulfill its obligations to other partners at the International Space Station before it leaves the project.

Borisov said that “the decision to leave the station after 2024 has been made.”

TIt comes amid soaring tensions between Russia and the West over the Kremlin’s military action in Ukraine.