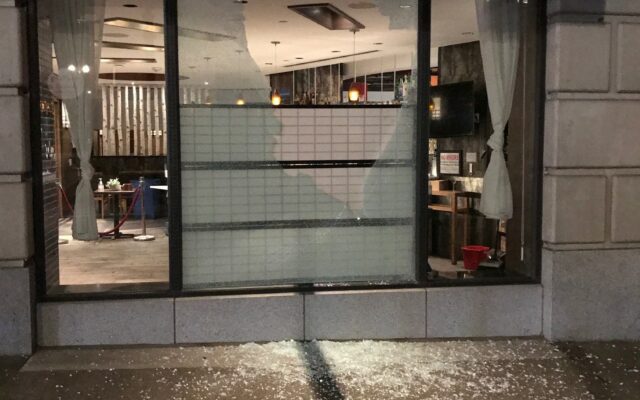 Friday evening a group of about 80-100 people gathered at Salmon Springs Fountain, marched over the Hawthorne Bridge to the east side of the Willamette River then returned to downtown and arrived at the Justice Center.

Police say the group dispersed on their own after a peaceful event.

According to Police, another group of an estimated several hundred people started marching from Directors Park around 9:30 p.m.

Some in the group started breaking windows of businesses which included a Nordstrom, Verizon store, Nike store, the Oregon Historical Society and more, police said.

Looting was reported as well, according to Police.

Portland Police declared a riot, saying that warnings were given via sound truck.

According to police, “Some of the individuals in the group were observed changing clothing in an attempt to disguise themselves and elude police actions.”

Police say that in addition to business destruction, multiple fires were set.

According to a police press release, “Police Bureau Officers dispersed the crowds to allow Portland Fire & Rescue to gain access to the fire locations to safely extinguish them. Given the extreme fire hazard conditions, it was critical to get these fires extinguished before they spread.”

Police say that pepper spray was used to disperse the crowds.

Police said in a press release that, “4 subjects were arrested. One was booked in jail, then released when investigators determined this was the appropriate course of action until further investigation could occur.”