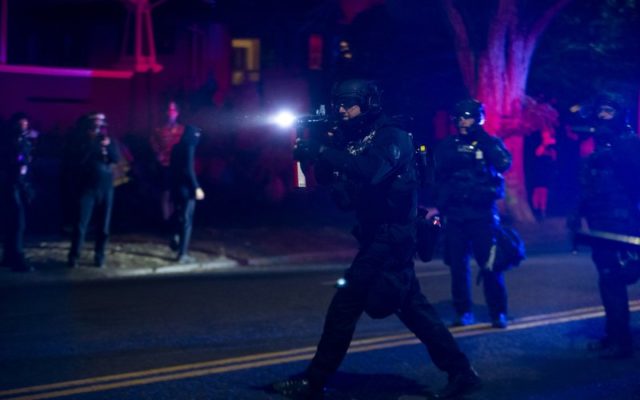 PORTLAND, Ore. (AP) — Smoke filled the air outside a police precinct in Portland, Oregon, as authorities worked to clear a crowd accused of damaging patrol vehicles, throwing projectiles and pointing lasers at officers.

Police declared a riot early Saturday outside the department’s north precinct. Smoke was deployed and officers physically forced protesters away from the area, news outlets reported.

Windows were broken on patrol vehicles, police said, and items such as glass bottles were thrown and lasers were aimed at officers. Videos posted online showed several people being detained after the riot declaration, but it wasn’t immediately clear how many arrests may have been made.

On Friday, protesters clashed with federal agents outside a U.S. Immigration and Customs Enforcement building. People in a group of about 100 late Thursday and before dawn Friday sprayed the building with graffiti, hurled rocks and bottles at agents and shined laser lights at them, Portland police said.

The agents set off smoke or tear gas and used crowd control munitions to try to disperse the crowd. Three people were arrested.

Also Friday, a number of federal buildings across the city were closed as the FBI investigated a car bomb threat.

Violent demonstrations have happened in Oregon’s largest city for more than two months following the death of George Floyd in Minneapolis police custody.