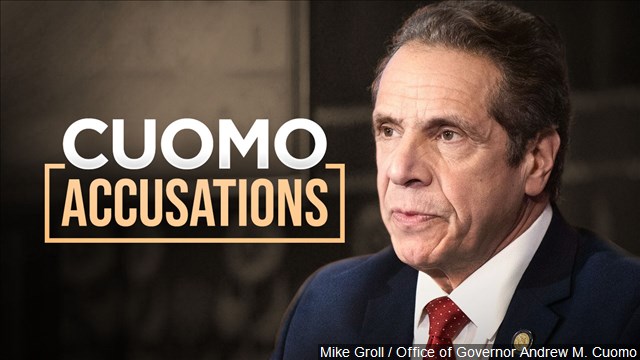 ALBANY, N.Y. (AP) — An aide to New York Gov. Andrew Cuomo says he groped her in the governor’s residence, a newspaper reported Wednesday, in the most serious allegation made yet by a series of women against the embattled Democrat.

The Times Union of Albany reported that the woman, who it did not name, was alone with Cuomo late last year when he closed the door, reached under her shirt and fondled her. The newspaper’s reporting is based on an unidentified source with direct knowledge of the woman’s accusation. The governor had summoned her to the Executive Mansion in Albany, saying he needed help with his cellphone, the newspaper reported.

“I have never done anything like this,” Cuomo said through a spokesperson Wednesday evening.

“The details of this report are gut-wrenching,” Cuomo said, adding that he would not speak to the specifics of this or any other allegation, given an ongoing investigation overseen by the state attorney general.

Albany Mayor Kathy Sheehan said in a statement Wednesday night that no criminal complaint had been filed by the alleged victim to the Albany Police Department.

The three-term governor faces harassment allegations from several other women and increasingly urgent calls for his resignation or impeachment from at least some fellow Democrats. Cuomo has repeatedly said he won’t resign.