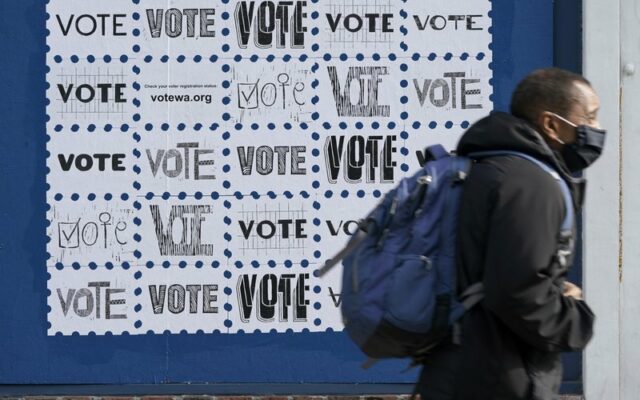 OLYMPIA, Wash. (AP) — A record number of voters in Washington have already returned their ballots in an election where they’ll weigh in on scores of federal and state races ranging from president to governor to local legislative districts.

Nearly 65 % of the state’s more than 4.8 million registered voters had already cast their ballot by Friday night, and voters have until 8 p.m. Tuesday to drop their ballots off at almost 500 drop-off boxes around the state. Four years ago, just over 41% of voters had returned their ballots by the weekend before the election.

Incumbent Democratic Gov. Jay Inslee, who is seeking to become the first incumbent elected to a third term in the state in more than 40 years, is facing Republican Loren Culp, the police chief of the small city of Republic who has campaigned against Inslee’s coronavirus restrictions.

In the race for lieutenant governor, Democratic U.S. Rep. Denny Heck, who is retiring from Congress, faces fellow Democratic Sen. Marko Liias. They are running to succeed current Democratic Lt. Gov. Cyrus Habib, who started unpaid leave in September as he started training in California to be a Jesuit priest.

All 10 of the state’s U.S. House seats are on the ballot, but Heck’s 10th Congressional District seat is the only one without an incumbent seeking another two-year term. Democrats currently hold seven of the state’s congressional seats, and Republicans hold three.

In the 10th congressional district, former Tacoma Mayor Marilyn Strickland and state Rep. Beth Doglio — both Democrats — emerged from the state’s top-two primary in August, which drew 19 candidates. Strickland would be the first Black member of the state’s congressional delegation, and the first Korean American woman elected to Congress in the country. Doglio, who identifies as bisexual, would be the first LGTBQ member of the Washington delegation.

The other key congressional race is in the 8th Congressional District, where incumbent Democratic Rep. Kim Schrier faces a challenge from Republican Jesse Jensen.

In addition to governor and lieutenant governor, voters will decide seven other statewide elected offices, including attorney general, auditor, insurance commissioner and lands commissioner, with all of the Democratic incumbents expected to fend off their Republican challengers. In the nonpartisan race for the Superintendent of Public Instruction, incumbent Chris Reykdal — who received just 40% of the vote in the August primary — faces Maia Espinoza.

All 98 state House seats and 26 of the Senate’s 49 seats are being decided by voters as well. Accounting for a Democrat who caucuses with Republicans, Democrats hold a 28-21 majority in the Senate and a 57-41 edge in the House.

Voters will also weigh in on a referendum on a measure passed by the Legislature this year that requires public schools to provide comprehensive sexual health education for all students. It marks the first time in the U.S. that voters will weigh in on sex ed.