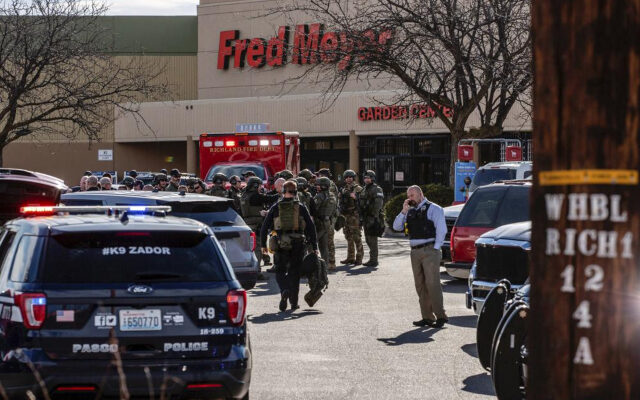 Authorities stage outside a Fred Meyer grocery store after a fatal shooting at the business on Wellsian Way in Richland, Wash., Monday, Feb. 7, 2022. (Jennifer King/The News Tribune via AP)

KENNEWICK, Wash. (AP) — The suspect in a deadly shooting at a grocery store in Richland, Washington, has been ordered to undergo a mental health evaluation at Eastern State Hospital.

The Tri-City Herald reported the request was made Wednesday by defense attorneys for Aaron Christopher Kelly. It means Kelly’s murder case in Benton County Superior Court will be on hold until a judge determines whether Kelly is competent to proceed to trial.

The Feb. 7 shooting incident at the Fred Meyer store ended up with shopper Justin Krumbah dead and employee Mark A. Hill critically wounded.

Prosecutor Andy Miller revealed Wednesday that shortly after the shootings, Kelly drove to Walla Walla and went to a branch of his Tri-Cities bank and “essentially emptied his bank account.”

Kelly was arrested about 11 hours after the shooting while driving on Interstate 90 near Sprague in Eastern Washington.

His next scheduled court date is April 20 to check on the status of his competency evaluation through the state hospital in Medical Lake.