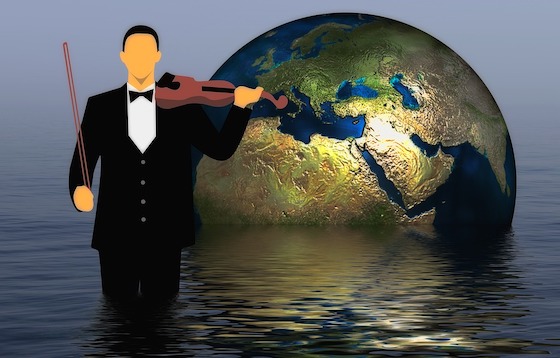 By government order we are all housebound. At least theoretically. Real life looks a little different. Retail stores are closed and so are restaurants, bars, and worst of all in my case, theaters. For the last two weeks and for the first time in 30-years I have no movies to review.

Most movies are screened for critics on Tuesday. In some cases they’ll do Wednesday and once in awhile on a Monday. However, mostly it’s Tuesday and I can count on both hands the number of Tuesdays I’ve had off in the last 30-years. A standard week is two to three movies. Some weeks there are as many as seven or eight.

I don’t know what to do with myself. There are three things that keep me active and busy. Obviously, one is movies. Another is drumming. I am in a classic rock band out of the Portland area called Squandered Youth. All the venues where we play are closed. So that activity avenue is closed, too.

Last, I play a lot of basketball. While many older people have hung up their shoes, I have not. I still play full-court, fast-break ball two or three times a week.

And yes, “older” people do engage in what is considered a young person’s game. The group I play with is over age 50, and the group age range goes into the late 70s. We have a passion for the game that hasn’t been squelched because of age.

Social distancing says I can’t do that now either.

Like most of us I’m obeying the edicts of this government entity or that and I’m staying home. So are you. That means we are using two things for entertainment. They are our phones and our televisions.

A lot of us take television seriously. Our homes have a room or two dedicated to watching the tube. They have TVs with huge screens and wrap around sound systems, dimmed lights and comfortable seating. Most of us have some sort of streaming delivery service or cable or satellite or a firestick. They give us access to movies.

We can’t see movies in theaters but we can see them at home.

The COVID-19 virus is a pandemic that feels a little like something out of a bad science fiction movie. We’re all housebound, grocery stores are emptying and a lot of us are in hoarding mode, hospitals are overwhelmed, basic services are curtailed or cut off completely and — let’s face it — the authorities can’t get a grip on things.

I don’t know about you, but to me it feels a bit like the end of the world.

That leads to my favorite movie guilty pleasure. It is end of the world movies. I love them and have since I was a kid trudging off to movie matinees. Sometimes I caught them on late night TV horror movie marathons.

The original The Invasion of the Body Snatchers is one of the best, and more original sci-fi flicks ever done. It’s terrifying. You can’t go to sleep. When you do you wake up as someone else.

Another I loved from the 1960s is The Last Man on Earth with Vincent Price. It’s a dark and depressing film based on a book titled I Am Legend. The first treatment was Price’s black and white version in 1964. It was done again as The Omega Man in 1971 and again as I Am Legend in 2007 with Will Smith.  Skip 2007. Do check out the Vincent Price flick if you can find it and Charlton Heston’s The Omega Man from 1971 is probably my favorite on my long list of end of the world favorites.

Let’s look at a few more of them.

The 1960s also gave us another of my all time faves. It’s the Heston star vehicle The Planet of the Apes. An asterisk is needed here. Roddy McDowell starred in the follow-up films from that series. They sucked. The new versions that feature Andy Serkis are excellent and will probably be easier to find in your search for great end of the world movies than the original film.

That said, The Planet of the Apes is a great piece of sci-fi with a terrific twist at the end. The 1960s also gave us The Time Machine and the original zombie thriller The Night of the Living Dead. What makes it so frightening is that it was shot in black and white. Plus, zombies killing off people somehow seems more believable than aliens invading from outer space.

Or at the time, viruses wiping out humanity.

As we moved into the 1970s, 1980s and 1990s the production of end of the world movies picked up like it really was the end of the world. The year 1971 saw the release of the granddaddy of all pandemic movies, The Andromeda Strain. A nasty bug from outer space lands on a small town and the only inhabitants that survive are an old drunk and a squalling baby.

This is one of my favorite sci-fi films that — really — isn’t all that sci-fi considering the pandemic we’re seeing now. At least in this movie, a special team designed to deal with the pandemic was already in place and the nation was prepared for the eventuality of a virus that could kill millions. So was the nation and the planet in many of the pandemic movies to follow.

With the advent of computers and better technology, movie special effects ramped up in the late 1960s and early 1970s and directors were better able to keep up with imaginative writers.

In addition to The Omega Man, the 1970s also gave us the first Mad Max and a really trippy comedy with Don Johnson called A Boy and His Dog. It’s not for everyone since the boy is a pervert and the dog is telepathic. The odds of finding that one are really slim but if you’re into the genre, it will be worth the hunt.

World-ending movies continued into the 1990s enhanced by more impressive special effects. For most of us, they were predictable and pretty stale. Kevin Costner did two yawners, The Postman and the much-anticipated and equally much-maligned Waterworld. We also got treated to end of the world flicks like Armageddon, Deep Impact and Schwarzenegger’s “T-2.”

The pandemic flick of the decade was a pretty good time-travel flick, 12 Monkeys.

Also, one of the great pleasures of my life was a long interview I did a couple of years ago with Dean Devlin who co-wrote and produced the movie.

In 1999 The Matrix rewrote the special effects book. The effects sequences and style developed by the Wachowskis were mind-boggling and lightyears ahead of anything any of us had seen before.

While not an end of the world flick, The Matrix is one of the most original movies ever made. That said, I was never able to forgive them for blowing it and doing parts two and three. Keanu Reeves putting on his foster grants and walking into an unknown fate was good enough for me and for most of the rest of us.

Next week we’ll look at what world-ending movies the studios gave us in the 2000s. In the meantime, there is plenty here to digest and — if you can find them — some really good films to keep you busy during your own home confinement.

I’m curious about what you think are really great end of the world movies. Click here to send me an email and let me know your favorites. I’ll share some of your comments here next week.

More about:
12 Monkeys
A Boy and His Dog
Armageddon
Blade Runner
Cable
Deep Impact
end of the world movies
Escape from New York
Firestick
home theater
home theater systems
I am Legend
independence day
Mad Max
Men in Black
pandemic movies
satellite TV
social distancing
Stay at home order
streaming services
T
T-2
The Andromeda Strain
The Invasion of the Body Snatchers
The Last Man on Earth
The Matrix
The Night of the Living Dead
The Omega Man
The Planet of the Apes
The Postman
The Quiet Earth
the Terminator
The Time Machine
The War of the Worlds
Waterworld