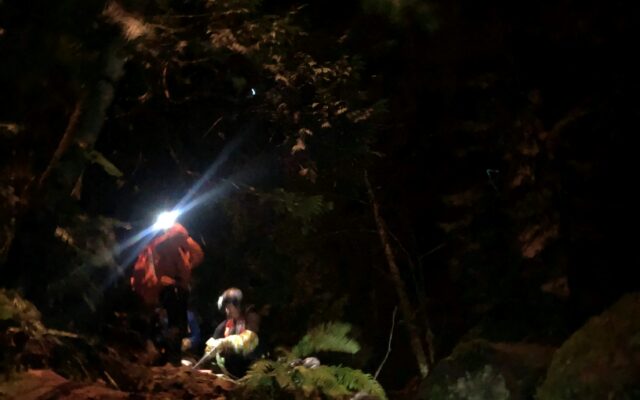 According to the Hood River County Sheriff’s Office, The injured hiker has been identified as 43-year-old Morgan Bailey of Milwaukie, Oregon. He is in stable condition:

A 43 year old man was rescued after being injured on the Gorton Creek Trail near Wyeth.

Two hikers called 911 after coming across the man on the trail, less than a mile from the trailhead.

They told authorities that he was  “conscious and breathing, but confused, injured and possibly hypothermic.”

The hikers tried to help the man down the trail but he was unable to make it down in his condition.

The man had been was hiking since at least Tuesday.

He was found at the base of a fifty foot cliff, which reportedly he fell from.

With the trail conditions being hazardous, and the man injured, it was decided to airlift the man out via helicopter.

“He was extremely fortunate. Had those hikers not located him, he had a very low chance of survival through the night. The work of the search and rescue teams, first responders, and the quick response from the Coast Guard led to a successful outcome today.” Said, Search & Rescue Coordinator Deputy Chris Guertin.