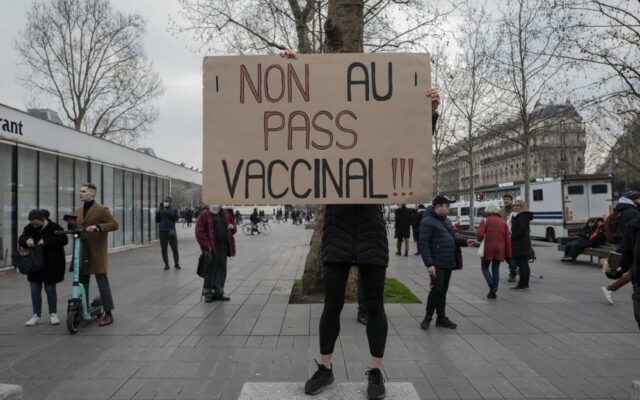 Demonstrator holds a placard that reads 'No to vaccine pass' in opposition to vaccine pass and vaccinations to protect against COVID-19 during a rally in Paris, France, Saturday, Jan. 22, 2022. (AP Photo/Rafael Yaghobzadeh)

People who aren’t vaccinated against COVID-19 are no longer allowed in France’s restaurants, bars, tourist sites and sports venues unless they recently recovered from the virus.

The new law came into effect Monday requiring a “vaccine pass” that is central to the government’s anti-virus strategy.

France is registering Europe’s highest-ever daily coronavirus infection numbers, and hospitals are continuing to fill up with virus patients, though the number of people in intensive care units has dropped in recent days.

The government has imposed few other restrictions amid the surge in the omicron variant, focusing instead on the vaccine pass, approved by France’s parliament and Constitutional Council last week.

Omicron is less likely to cause severe illness than the previous delta variant, according to studies. Omicron spreads even more easily than other coronavirus strains, and has already become dominant in many countries. It also more easily infects those who have been vaccinated or had previously been infected by prior versions of the virus.

Critics question whether the pass will make much difference in a country where 94% of French adults have had at least one vaccine dose, and scattered groups held protests Saturday against the new law. The government hopes that it protects the most vulnerable and reduces pressure on crowded ICUs, where most patients are unvaccinated.

Since last summer, France has required a “health pass” to go to any cafe, museum, movie theater or take a regional train or domestic flight. But until Monday, unvaccinated people could activate the pass by getting a recent negative test. The new pass only works for people who are fully vaccinated, and those who recently recovered from the virus.

France, meanwhile, opened up access to booster shots to 12- to 17-year-olds on Monday.