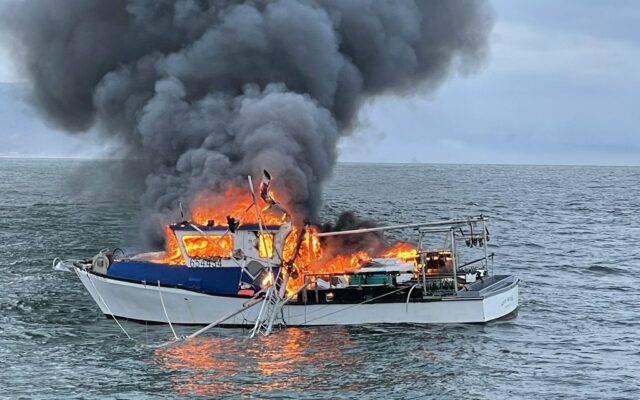 (Manzanita Beach, Ore) — The USCG confirmed that the captain of a fishing boat was rescued after the vessel caught fire off the coast of Manzanita Beach on Saturday morning.

According to U.S. Coast Guard officials, the person was rescued from the water by a Good Samaritan. Their current condition is unknown.

Officials with the Coast Guard say they received the initial distress call at 6:30 am. A Coast Guard crew out of Tillamook responded, but found that a good Samaritan in another fishing boat had already rescued the boat captain.

Initially, the condition of the Boat captain is unknwn, but USCG says the rescued, is lucky someone was around to help.

Aaron Harris with USCG Motor Lifeboat Station in Tillamook Bay, says if not, the captain may have had to jump in the water and wait until the Coast Guard crew arrived.

Flames on the fishing vessel continued to burn for hours as the Coast Guard maintained a 1,000-yard safety zone.

The USCG said that the boat had burned down to the waterline by 3:00 in the afternoon, and had drifted to within a mile west of Nehalem State Park.

The boat was a fiberglass-hulled commercial salmon trawler. Harris says that the fire reportedly started in the boat’s “stack”. He adds, that much a like a chimney, stacks can have gradual buildup that eventually causes a fire.

#BreakingNews (1/2) This morning, #USCG crews responded to a 42-foot commercial fishing vessel on fire off the coast of Manzanita Beach, #Oregon. The 1 person on board was rescued from the water by a Good Samaritan. Their current condition is unknown. pic.twitter.com/Js0a4eRzGQ

(2/2) The initial distress call to the #USCG came in at 6:30 a.m. The fire continues to burn. The #USCG response crew from Tillamook remains on scene to enforce a 1000-yard safety zone around the boat. @KGWNews @KOINNews @KATUNews @fox12oregon @TheNewsGuard @DailyAstorian pic.twitter.com/09AQgjJLCD