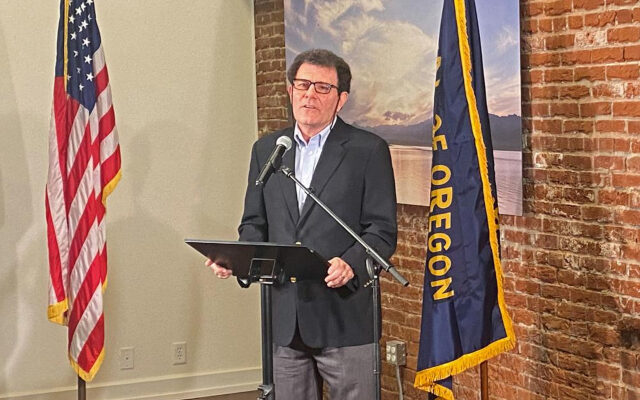 The longtime New York Times columnist left his job last year to try a run at the state’s highest elected office. But with the campaign cut short by residency requirements in Oregon’s constitution, Kristof said he’s headed back to the newspaper, Oregon Public Broadcasting reported.

After reimbursing himself for a little more than $2,000 for personal expenses, Kristof donated $990,000 to a new political action committee called Oregon Strong, which is directed by Kristof’s wife, Sheryl WuDunn, and his former campaign bookkeeper, Elizabeth Wilson.

Kristof said the financial shift would distance himself from the money while he continued working on his plan for spending it. He wants to create a loan program to help Oregonians pay for job training.

“Since I’m headed back to journalism I thought it best to end the Nick for Oregon PAC and separate myself from its Oregon Strong successor,” Kristof said in an email Tuesday. “But I continue to be in planning for the job training programs.”

Kristof hasn’t shared precise details but in a June email to donors said he hopes to leverage the money to start a program that will front Oregonians the money for job training programs, and only require repayment if they find gainful employment.

Such systems, sometimes called “pay it forward funds,” have emerged in states including Ohio and New Jersey. One program fronts money for diesel mechanic training in Ohio, then bases the amount a participant pays back on what they earn once they graduate.

Kristof says his program would be the first of its kind on the West Coast. He’s been in discussions with a national nonprofit that runs the Ohio financing program. The Oregon Secretary of State’s Office has said charitable donations are a valid use of unspent campaign funds.

Kristof, who grew up in rural Yamhill, emerged as a surprising and formidable Democratic candidate for governor last year. His decades at The New York Times had led to deep-pocketed connections, and a donor list that included Angelina Jolie, Melinda French Gates and Lawrence Summers.

But Kristof owned a home and voted in New York state. Though he moved back to run his family farm in Yamhill, state elections officials and the Oregon Supreme Court determined he hadn’t done that in time to satisfy the three-year residency requirement for governor.

Kristof spent much of the $2.7 million he raised on campaign payroll and attorneys who tried to save his candidacy. He’s also dolled out money to other Democrats including $10,000 to Tina Kotek, his former political rival and now the Democratic nominee for governor. He also given to Democratic legislative candidates, and candidates for the Yamhill County Commission.

Kristof said recently he has no plans to run for political office again.