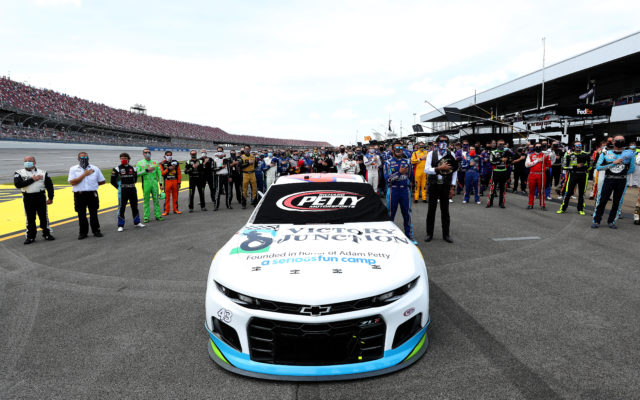 TALLADEGA, ALABAMA - JUNE 22: Bubba Wallace, driver of the #43 Victory Junction Chevrolet, and team owner, and NASCAR Hall of Famer Richard Petty stand for the national anthem prior to the NASCAR Cup Series GEICO 500 at Talladega Superspeedway on June 22, 2020 in Talladega, Alabama. A noose was found in the garage stall of NASCAR driver Bubba Wallace at Talladega Superspeedway a week after the organization banned the Confederate flag at its facilities. (Photo by Chris Graythen/Getty Images)

Columbia is proud to announce a multiyear sponsorship with @NASCAR driver @BubbaWallace. Bubba is a #testedtough competitor and a courageous leader who has inspired us with his unifying message of “Compassion. Love. Understanding.” Learn more… https://t.co/KJroLHMJyu pic.twitter.com/hfJh6Wb2AZ

The company says “Bubba is a tough competitor and a courageous leader who has inspired us with his unifying message of “Compassion. Love. Understanding.” The Columbia No. 43 car debuts at the Dover International Speedway on August 23rd.”

In June, Wallace, the sports only full time Black driver in the top series, was thought to be the target of a hate crime when a noose was found hanging in his teams garage at a track.  The FBI investigated and determined no crime had been committed and that noose was a garage door pull that had been tied into a noose the previous year, before it was ever known that garage would be assigned to Wallace.

Couldn’t be any more excited to announce @Columbia1938 is jumping on board as a multi-year partner! Grateful for the opportunity, and proud to represent this organization on and off of the track. #ColumbiaAthlete pic.twitter.com/xVbfbiTwJc

Wallace tells NASCAR.com,  “Columbia Sportswear is a perfect fit for my lifestyle away from the track. I love spending time outdoors — boating, golfing, hiking, photography — just anything to help me decompress from a hectic racing schedule. I’m beyond excited to be a part of the Columbia family and can’t wait to work with them on some unique content and fly their colors next weekend at Dover (International Speedway).”

This is the first time Columbia Sportswear has sponsored a NASCAR team or driver.