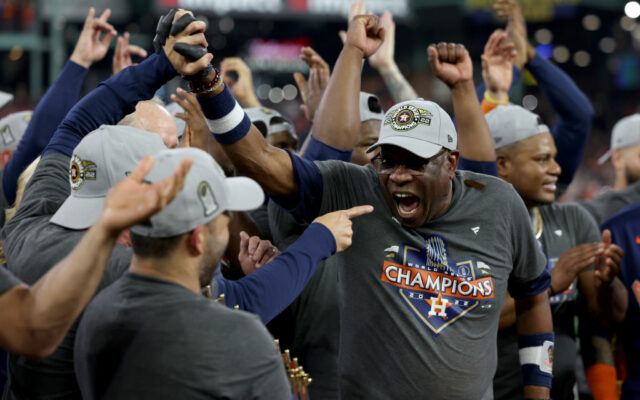 HOUSTON, TEXAS - NOVEMBER 05: Manager Dusty Baker Jr. of the Houston Astros celebrates after defeating the Philadelphia Phillies 4-1 to win the 2022 World Series in Game Six of the 2022 World Series at Minute Maid Park on November 05, 2022 in Houston, Texas. (Photo by Harry How/Getty Images)

HOUSTON (AP) – Yordan Alvarez hit a towering three-run homer and the Houston Astros clinched their second World Series title in six seasons with a 4-1 win over the Philadelphia Phillies in Game 6. That also gave 73-year-old manager Dusty Baker his first title in 25 seasons as a manager, the last three in Houston. The 450-foot blast in the sixth inning was the first time the Cuban slugger went deep since the first two games this postseason. It made a winner out of Framber Valdez, who had allowed Kyle Schwarber’s solo shot in the top of the sixth. Astros rookie shortstop Jeremy Pena was the World Series MVP. The 25-year-old star from the Dominican Republic also was MVP of the AL Championship Series.