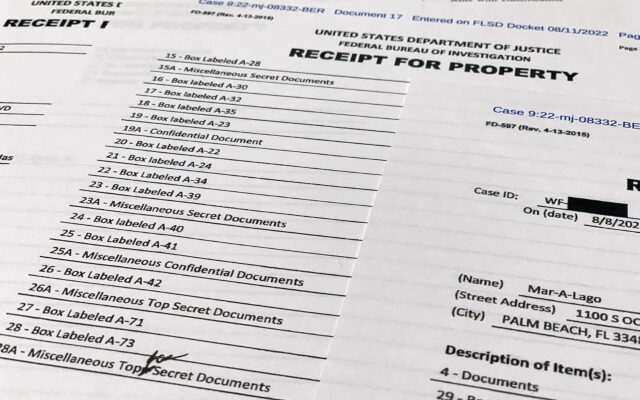 The receipt for property that was seized during the execution of a search warrant by the FBI at former President Donald Trump's Mar-a-Lago estate in Palm Beach, Fla., is photographed Friday, Aug. 12, 2022. (AP Photo/Jon Elswick)

WASHINGTON (AP) – A federal appeals court has halted an independent review of documents seized from former President Donald Trump’s Florida estate, removing a hurdle the Justice Department said had delayed its criminal investigation into the retention of top-secret government information.

The decision by the three-judge panel represents a significant win for federal prosecutors, clearing the way for them to use as part of their investigation the entire tranche of documents seized during an Aug. 8 FBI search of Mar-a-Lago.

It also rejects the arguments of Trump’s lawyers, who had said the former president was entitled to have a so-called “special master” conduct a neutral review of the thousands of documents taken from the property.