2020 Grammy Winners And A Portland Connection 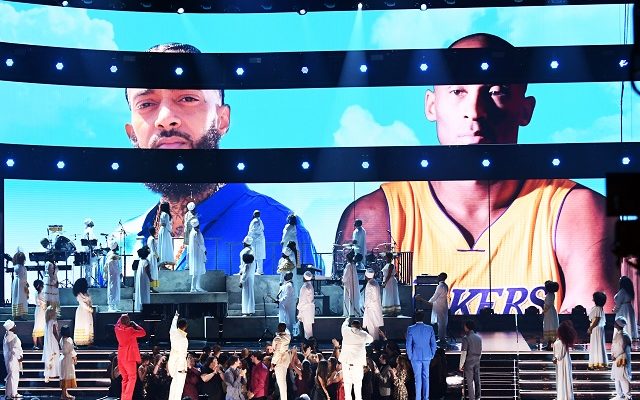 Los Angeles, Cali. (AP) The unpredictable and somber Grammy Awards honored NBA star Kobe Bryant in his home court at the Staples Center, while an 18-year-old Billie Eilish was stunned by her own five-award sweep. Host Alicia Keys made last-minute changes to the show, including a tribute song, after Bryant died in a helicopter crash earlier in the day. The late LA-based rapper and activist Nipsey Hussle got posthumous Grammys and a tribute from his friends and collaborators. But the biggest moment of the night was when Eilish and her brother Finneas O’Connell ended up with 11 Grammy trophies for an album they made in their bedrooms.

Grammy night has proven historic for 18-year-old Billie Eilish. The singer-songwriter from Los Angeles swept all of the major awards for the do-it-yourself album she made with her brother in a bedroom of a home where they grew up. She gave voice to young people suffering from depression, and paid tribute to her fans upon winning one of her trophies. No artist has swept the top four awards since Christopher Cross in 1981. The annual show was made somber by the death of NBA legend Kobe Bryant earlier in the day. It also didn’t quiet a controversy among some artists who believe rap and hip-hop have never gotten the respect they deserve from the Grammys.

The Portland Connection: A singer makes a political statement on the Grammy’s red carpet, in a dress designed in Portland. The Hollywood Reporter says Joy Villa’s red gown, that read Trump 2020, was designed by Desi Allinger, of Desi Designs. The singer notified the White House that she would wear something to show support. Villa has made political statements like this twice before at the Grammy’s.

Record of the Year

Album of the Year

WINNER: When We All Fall Asleep, Where Do We Go?, Billie Eilish

Thank U, Next, Ariana Grande

Cuz I Love You (Deluxe), Lizzo

Father of the Bride, Vampire Weekend

Song of the Year

Tank and the Bangas

“You Need to Calm Down,” Taylor Swift

The Lion King: The Gift, Beyoncé

WINNER: When We All Fall Asleep, Where Do We Go?, Billie Eilish

Thank U, Next, Ariana Grande

WINNER: “Got to Keep On,” The Chemical Brothers

WINNER: No Geography, The Chemical Brothers

Hi This Is Flume (Mixtape), Flume

“Bow Down,” I Prevail

Amo, Bring Me The Horizon

In the End, The Cranberries

Being Human in Public, Jessie Reyez

Revenge of the Dreamers III, Dreamville

“I Don’t Remember Me (Before You),” Brothers Osborne

Stronger Than the Truth, Reba McEntire

In the Key of the Universe, Joey DeFrancesco

The Secret Between the Shadow and the Soul, Branford Marsalis Quartet

Come What May, Joshua Redman Quartet

“God’s Not Done With You (Single Version),” Tauren Wells

I Know a Ghost, Crowder

Haven’t Seen It Yet, Danny Gokey

His Name Is Jesus, Tim Menzies

“I’m on My Way,” Rhiannon Giddens with Francesco Turrisi

Who Are You Now, Madison Cunningham

If You Can’t Stand the Heat, Frank Solivan & Dirty Kitchen

Sitting on Top of the Blues, Bobby Rush

Somebody Save Me, Sugaray Rayford

My Finest Work Yet, Andrew Bird

As I Am, Julian Marley

Ain’t Too Proud: The Life and Times of the Temptations

The Lion King: The Songs

Quentin Tarantino’s Once Upon a Time in Hollywood

Spider-Man: Into the Spider-Verse

WINNER: A Star Is Born

“The Ballad of the Lonesome Cowboy,” From: Toy Story 4

“Girl in the Movies,” From: Dumplin’

“Sprit,” From: The Lion King

Producer of the Year, Non-Classical

“We’ve Got to Try,” The Chemical Brothers