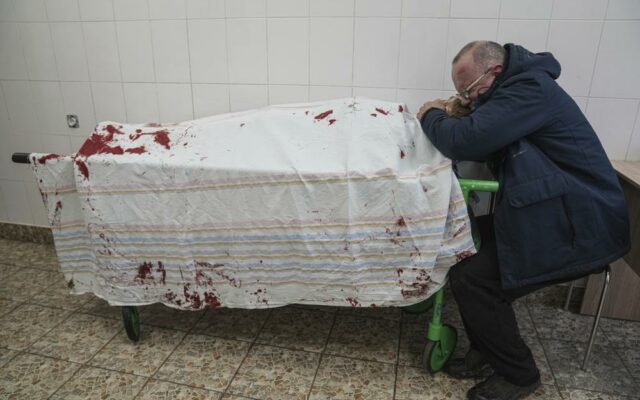 Serhii, father of teenager Iliya, cries on his son's lifeless body lying on a stretcher at a maternity hospital converted into a medical ward in Mariupol, Ukraine, Wednesday, March 2, 2022. (AP Photo/Evgeniy Maloletka)

KYIV, Ukraine (AP) — Russian forces captured a strategic Ukrainian port and besieged another Thursday in a bid to cut the country off from the sea, as the two sides met for another round of talks aimed at stopping the fighting that has set off an exodus of over 1 million refugees.

Moscow’s advance on Ukraine’s capital has apparently stalled over the past few days, with a huge armored column north of Kyiv at a standstill, but the military has made significant gains in the south as part of an effort to sever the country’s connection to the Black and Azov seas.

The Russian military said it had control of Kherson, and local Ukrainian officials confirmed that forces have taken over local government headquarters in the Black Sea port of 280,000, making it the first major city to fall since the invasion began a week ago.