Roses for Kobe and Gianna as Lakers return to action 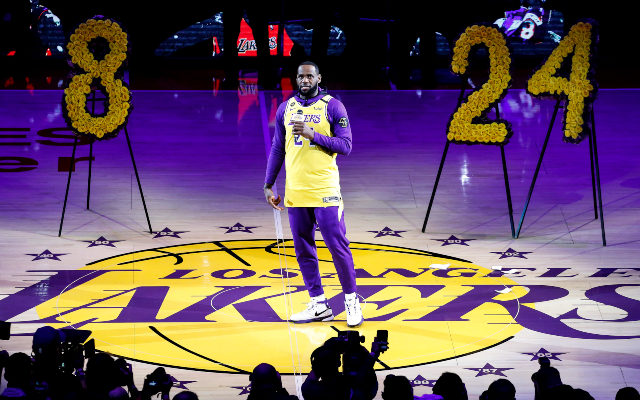 Los Angeles Lakers’ LeBron James wearing No. 24 jersey speaks in a memorial for the late Kobe Bryant prior to an NBA game between the Los Angeles Lakers and the Portland Trail Blazers at Staples Center Friday, Jan. 31, 2020, in Los Angeles. Bryant, the 18-time NBA All-Star who won five championships and became one of the greatest basketball players of his generation during a 20-year career with the Los Angeles Lakers, died in a helicopter crash Sunday. (AP Photo/Ringo H.W. Chiu)

LOS ANGELES (AP) — LeBron James wiped his eyes as the national anthem ended. Wearing Kobe Bryant’s No. 24 jersey, James wrapped teammate Anthony Davis, in a No. 8 jersey, in an embrace.

The Lakers’ two current superstars were back on the court Friday night for the team’s first game since Bryant, his 13-year-old daughter Gianna and seven others were killed in a helicopter crash five days earlier.

“Everybody was emotional,” James said after the Lakers lost to Portland 127-119.

Davis, who scored 37 points, added, “We wanted to make him proud.”

Portland’s Damian Lillard had 48 points, 10 assists and nine rebounds in a Kobe-like performance.

“I don’t think anybody walks away from this moment and this situation a winner,” Lillard said. “The memories that we’ll take away from it was just sad and just tough.”

“Just showing that appreciation and love he gave us way before he knew us,” said James, who had 22 points, eight rebounds and 10 assists.

The crowd tried to rally the Lakers, breaking into chants of Bryant’s name when the home team was down double digits.

“That was pretty awesome,” said coach Frank Vogel, who used all 13 players on the roster. “I wanted to give everyone an opportunity to contribute.”

James took center court in a pregame ceremony and read the names of the victims, ending with Bryant. He told the Staples Center crowd he had remarks prepared and pulled a piece of paper from his sweatpants. But then James tossed it to the floor.

“Laker Nation, I would be selling you short if I read off this (expletive), so I’m going to go straight from the heart,” he said.

“The first thing comes to mind is all about family. As I look around this arena, we’re all breathing, hurt and heartbroken,” James said. “The best thing you can do is lean on the shoulders of your family.”

He recalled watching Bryant from afar before joining the NBA out of high school, like Bryant did.

“Kobe is a brother to me,” James said. “The one thing we always shared was that determination to just want to win. I want to continue his legacy, not just this year, but as long as we continue to play basketball.”

James noted there will be a memorial at some point for Bryant.

“I look at this as a celebration tonight,” he said.

Red roses adorned the courtside seats where Bryant and his daughter sat at the last Lakers game they attended earlier in the season. On the overhead video board, photos of Bryant in action for the Lakers alternated with those of the others killed.

Usher stood at center court of the darkened arena in front of No. 8 and No. 24 yellow rose arrangements to sing “Amazing Grace.” Cellist Ben Hong from the Los Angeles Philharmonic performed while video of Bryant talking about his life and career played.

Fans interrupted the silence with chants of “Kobe! Kobe!” and “MVP! MVP!”

“In some ways the whole night did not feel normal,” Vogel said. “This week has been about life more than basketball wins and losses. We’re all just trying to pick ourselves back up.”

The crowd stood for 24.2 seconds of silence as the shot clocks ticked off the time until the horn blared. Spotlights shone on the empty seats set aside for Bryant and his daughter. His was a No. 24 jersey and hers was a black-and-white Mamba jersey from her team that Bryant coached.

The emotion carried over to halftime when Wiz Khalifa and Charlie Puth teamed on their poignant hit “See You Again.” After the final notes sounded, Bryant’s name rose up again in chants from the crowd.

In the couple of hours leading up to the game there was mostly silence. The electric atmosphere that surges through the arena before NBA games was nowhere to be felt. Media talked quietly among themselves without the usual music playing. Somber ushers took up their positions with black ribbons attached to their purple work shirts. Grief counseling was offered to arena staff and one female usher pulled tissues out of her pocket that had been provided.

Inside the Lakers locker room, Bryant’s No. 24 gold jersey hung on a wooden hanger from a fire alarm next to James’ locker. It was Bryant’s locker when he helped the team win five NBA championships during his 20 years in Los Angeles.

“He’s been really a tower of strength for all of us,” Vogel said of James. “We’re following his lead.”

Back in the arena, Jeff Nadal was among the early arriving fans. Nadal rolled up a giveaway No. 24 T-shirt in his hand and rested his chin on it, staring into space.

The music began playing once the public flowed through the doors. Several fans donned the gold T-shirts at their seats; others took pictures of the video board and the electronic ribbon scrolling the victims’ names around the upper level.

Across the street from Staples Center, large crowds continued to gather for informal public mourning at a plaza loaded with flowers, balloons and hand-written messages, many on the pavement, honoring Bryant and his daughter.

Large poster boards covered in signatures and messages were moved to the middle of the blocked off street separating the arena and the LA Live entertainment district.

The memorabilia will be collected, inventoried and given to the Bryant family at their request. The flowers will be composted and used in plantings around the arena.