MILLINGTON, Tenn. – As Americans reflect on the service of military men and women this Veterans Day, some may not realize that they are fellow residents with those who serve in the U.S. Navy Reserve. 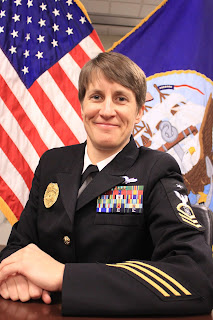 Senior Chief Petty Officer Sarah Payton, a resident of Portland, Oregon, supports and defends freedom around the world, as a Navy master-at-arms, who is responsible for the safety, security, and law enforcement onboard Navy bases and ships. As the senior enlisted leader, Payton is responsible for accomplishing the mission while developing and training junior sailors and officers.
Payton is a 2000 Baker High School graduate and native of Baker City, Oregon. Payton also earned a degree from Portland State University in majoring in sociology.

Reservists seamlessly support and actively aid military missions while continuing to lead their own independent lives in the civilian world, according to Navy officials.

“The Navy Reserve is a 100K strong team of sailors embedded across the fabric of society, loyal and dedicated patriots, serving both in uniform and civilian jobs, ready to defend the homeland and deploy across the world in a moment’s notice,” said Vice Adm. Luke McCollum, Chief of Navy Reserve.

The Navy Reserve provides strategic depth to America’s Navy as it protects the American homeland and advances economic prosperity by preserving freedom of the seas.

“Balancing my civilian life with the Navy is very challenging,” said Payton. “I constantly have to re-evaluate my goals and demands for the Navy with the demands of the family and civilian career.”

Payton serves with Coastal Riverine Squadron One responsible for leading 120 sailors. Coastal Riverine Forces are responsible for the safety and security of Merchant Marine ships, Navy ships and U.S. assets who visit shore or “brown” water overseas. They provide security on ships and conduct boat operations on 34 foot boats protecting the assets from pirate boats and terrorist activity.

Payton is playing an important part in America’s focus on rebuilding military readiness, strengthening alliances and reforming business practices in support of the National Defense Strategy.

“Our priorities center on people, capabilities and processes, and will be achieved by our focus on speed, value, results and partnerships,” said Secretary of the Navy Richard V. Spencer. “Readiness, lethality and modernization are the requirements driving these priorities.”

Though there are many ways for sailors to earn distinction in their command, community and career, Payton is most proud of making the rank of senior chief.

“I’m proud to have earned the rank of senior chief petty officer,” said Payton “Earning this rank was hard work but I have my family and sailors to thank for their support.”

Serving in the Navy is a continuing tradition of military service for Payton who has military ties with family members who have previously servedPaytonis honored to carry on that family tradition.

As a member of one of the U.S. Navy’s most relied upon assets, Payton and other sailors know they are part of a legacy that will last beyond their lifetimes providing the Navy the nation needs.

“Serving in the military means protecting the people, culture and freedom of the United States of America,” added Payton. “It gives me great pride and honor to be part of a small group of people who serve this country, who when called upon, run to the fight often risking their lives to protect citizens at home.”