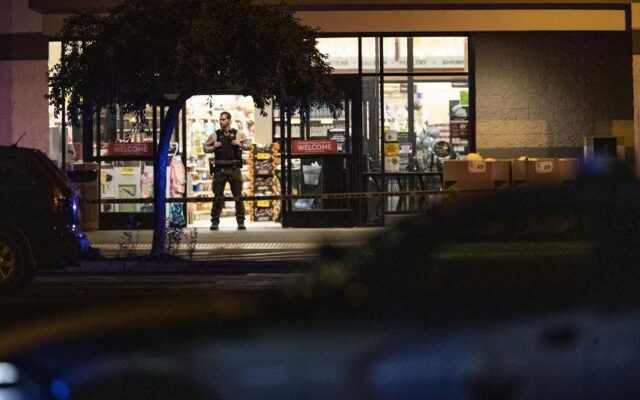 BEND, Ore. (AP) — Governor Kate Brown Friday thanked the police officers and first responders who were on the scene of the deadly shooting at a Bend Safeway.

The Bend police officers and first responders who were on duty Sunday night ran into the store while shots were being fired. Because they responded so quickly, lives were saved. Thank you.

The victims, their families, and the Bend community remain in all our thoughts. pic.twitter.com/Odm5jbBHQH

The Safeway employee who was one of two people killed in a Bend, Oregon, supermarket shooting had time to flee but instead hid behind a produce cart and attacked the assailant with a produce knife, an action that likely saved lives, authorities said Tuesday.

Surveillance video shows that 66-year-old Donald Ray Surrett Jr., a two-decade U.S. Army veteran, waited in his hiding spot until the gunman looked the other way. Surrett then emerged with the knife that he drew from his hip, police spokeswoman Sheila Miller said.

The gunman, identified as 20-year-old Ethan Blair Miller, on Sunday evening fatally shot Surrett and then killed himself as police closed in. Officers found an AR-15-style rifle and a shotgun near his body and police said he had four 30-round magazines for the rifle on his body when he died.

Surveillance video also shows two people going back into the Safeway as the shooting unfolded to pull out the other victim, 84-year-old Glenn Edward Bennett, who had been shot just inside the store’s entrance.

“Bend Police are extremely thankful to our community members for the efforts they made during this incident,” Miller said.

Authorities continued to collect evidence from the crime scene. More than 100 bullet casings have been recovered so far, police said.

Authorities also confirmed Tuesday that the gunman had worked at the Safeway for a short time in recent years; one high school acquaintance told The Associated Press he saw him gathering up carts in the parking lot in 2020.

The shooter lived in an apartment complex behind The Forum Shopping Center.

He fired shots into his own car on Sunday evening as soon as he left the complex and continued firing as he entered the shopping complex’s parking lot and then went into the Safeway. Bennett was killed at the store’s entrance, police said, and the shooter then moved through the aisles “spraying shots” from the assault rifle until Surrett confronted him.

Police entered the supermarket from the front and rear as shots were still being fired. The entire incident, from the first 911 calls to the gunman’s suicide, lasted just four minutes, police have said. In addition to the guns in the store, the shooter had a sawed-off shotgun and three Molotov cocktails in his car, police said.

Fifty shotgun shells total were found between his car and apartment and 150 additional rounds of ammunition were in his apartment.

All the guns were purchased legally, authorities said. Police have previously said the gunman had no criminal history and police had not been contacted about him prior to the shooting.

After the shooting, acquaintances recalled the gunman as a loner who was passionate about mixed martial arts and was known for getting into fights at the high school where he graduated in 2020.

Police have previously said they are also investigating the “shooter’s writings” but have declined to comment further on postings on several online platforms that appear to have been written by him in recent months.

In posts on several sites, someone who appears to be the gunman says he’s struggled to recover from the isolation and loneliness of the pandemic, expresses hatred for himself and indicates he planned to attack his alma mater next week, but couldn’t wait until then because “the Rage has become uncontrollable.”

Authorities sought a search warrant for digital devices found at the gunman’s apartment and it will take several days to go through those materials and develop a clearer picture, said Police Chief Mike Krantz.

“A lot of people sent us follow-up information about what has been posted on social media or other outlets and our investigators will sift through that information and make those connections — if it’s truly connected— and ensure that we have accurate information,” he said.

About 150 people gathered in a Bend park on Monday night for a vigil to remember the victims. A church choir sang and a pastor and city officials spoke as people laid flowers.

Craig Van Bruggen attended the vigil and told Oregon Public Broadcasting that he was in the Safeway on the phone with his wife when the shooting began. He believes Surrett’s actions helped him escape without injury.

“Sounds like Donald potentially slowed down the shooter enough to save some lives, and he’s a hero,” Van Bruggen said.

Debora Jean Surrett, the ex-wife of the Safeway employee killed in the attack, told AP in a phone interview that Surrett served in the Army for 20 years as a combat engineer. He wasn’t deployed to active combat zones, but during the 20 years they were married from 1975 to 1995, they were stationed in Germany three times and lived on military bases across the U.S.

The shooter graduated from Mountain View High School in Bend in 2020, according to online records, and classmate Isaac Thomas remembered him as an extremely combative person who had few friends.

Thomas said he was suspended for a week as a freshman for fighting with the gunman. The gunman held onto a grudge from that fight and once threatened to shoot him, Thomas told AP.

“At one point he said he was going to shoot me and I was like, ‘Get over yourself’ because I didn’t think he had a gun, but I guess I was wrong,” Thomas said.

Thomas recalled running into the shooter in 2020 in the parking lot of the Safeway, where the gunman was gathering up carts as part of his job. He recognized him and threatened him again although several years had gone by, Thomas said.