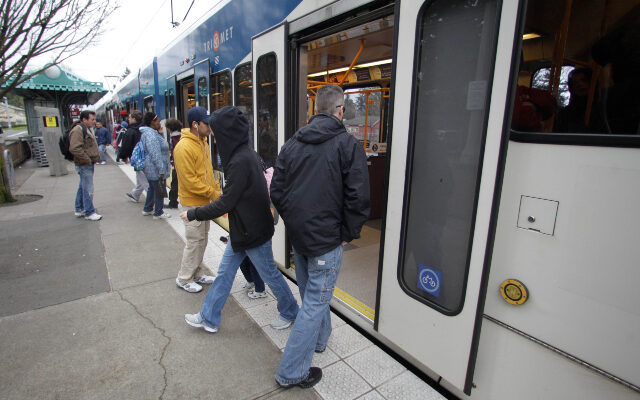 PORTLAND, Ore. — Witnesses on a MAX train in Northeast Portland on Wednesday morning reported a passenger was armed with a rifle near the 82nd Avenue stop.

Officers caught up with the man at 102nd and E Burnside and disarmed him around 20 minutes after the call.  He was actually carrying an airsoft gun.

The Multnomah County Sheriff’s Office leads the Transit Police Division.  A spokesperson tells us the passenger was not cited for violating TriMet’s rules on weapons.

Tri-Met rules state: “No person, except a peace officer, shall bring or carry aboard a District Vehicle any firearm, knife (except a folding knife with a blade less than 3 ½ inches in length), or any other instrument, article, device, material or substance specifically designed for, or attempted to be used to, inflict or cause bodily harm to another, except in accordance with administrative rules as may be promulgated by the General Manager or otherwise provided by law. Where possession of such weapons cannot be prohibited by law, a person in possession of a weapon, or in possession of a replica firearm, may not display or carry the weapon or replica firearm, in a manner which is likely to result in fear or alarm by other persons or District employees. As used in this section “replica firearm” means any device that substantially resembles a firearm or can reasonably be perceived to be an actual firearm.”

The sheriff’s office tells FM News 101 that the pellet gun was sticking out of the man’s backpack and the passenger voluntarily surrendered the weapon.

“Officers are performing follow up investigation.  If it is determined a crime was committed, charges will follow,” said Chris Liedle with the Multnomah County Sheriff’s Office.