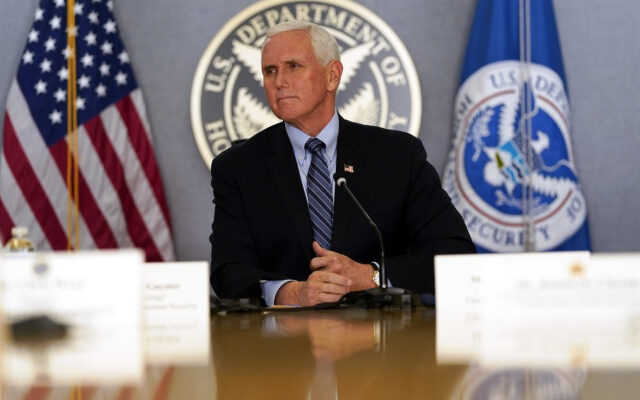 WASHINGTON (AP) — Vice President Mike Pence has called his soon-to-be successor Kamala Harris to offer his congratulations, according to two people familiar with the conversation.

It’s the first known contact between the elected members of the outgoing and incoming administrations. President Donald Trump has not reached out to President-elect Joe Biden and has repeatedly questioned the legitimacy of Biden’s win.

But Pence has become an unexpected defender of Biden’s. The vice president resisted pressure from Trump to object to the Democrat’s election win while presiding over Congress’ certification of the Electoral Vote count last week.

Pence will also attend Biden’s Jan. 20 inauguration, which Trump is refusing to attend.

One of the people familiar with the Thursday afternoon conversation described it as a “good call,” with Pence congratulating his successor and offering assistance. They spoke on condition of anonymity to describe the private conversation.

The call came less than a week before Biden and Harris take office, and just over a week after the storming of the Capitol by Trump’s supporters.

While Trump has remained largely behind closed doors fuming since his loss, Pence has been stepping up and fulfilling many of the ceremonial duties of the presidency, including greeting greeting members of the National Guard now protecting the Capitol building Thursday evening.

The call to his successor is a continuation of the traditional show of comity between outgoing and incoming leaders that Trump, in contrast, has flouted. In 2008, then-Vice President Dick Cheney called Biden to wish him congratulations the night of his win, and invited Biden and his wife Jill to tour the vice-presidential residence on the grounds of the U.S. Naval Observatory shortly before the 2009 inauguration.

It’s unclear whether Pence will do the same for Harris. Much of Washington is under heightened security after last week’s violent insurrection at the Capitol, with law enforcement officials warning of more potential for violence in advance of Biden’s inauguration.

While Biden said he welcomed Trump’s decision to avoid his inauguration, he also said he’d be “honored” to have Pence attend, and that it was important to maintain “historical precedent” with respect to a peaceful transfer of power as much as possible.