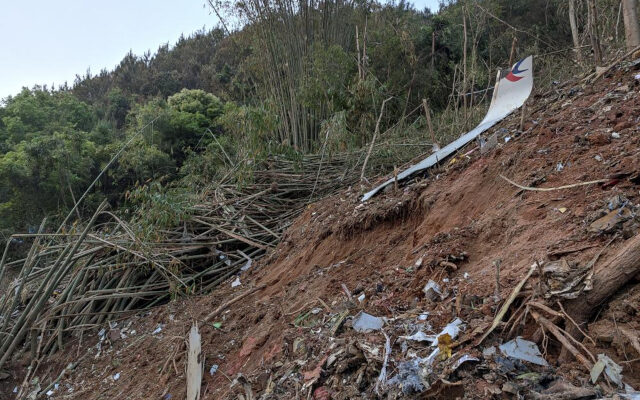 In this photo taken by mobile phone released by Xinhua News Agency, a piece of wreckage of the China Eastern's flight MU5735 are seen after it crashed on the mountain in Tengxian County, south China's Guangxi Zhuang Autonomous Region on Monday, March 21, 2022. (Xinhua via AP)

WUZHOU, China (AP) – Hundreds of searchers wearing rubber boots and full rain gear are heading into muddy, forested hills in southern China to try to find the second black box from a China Eastern passenger jet that crashed in southern China with 132 people on board earlier this week.

Three days after the crash, officials said they had found 183 pieces of the plane including engine parts and cockpit items, 21 objects belonging to victims and some human remains.

One of the black boxes was found on Wednesday.

No survivors have been found.