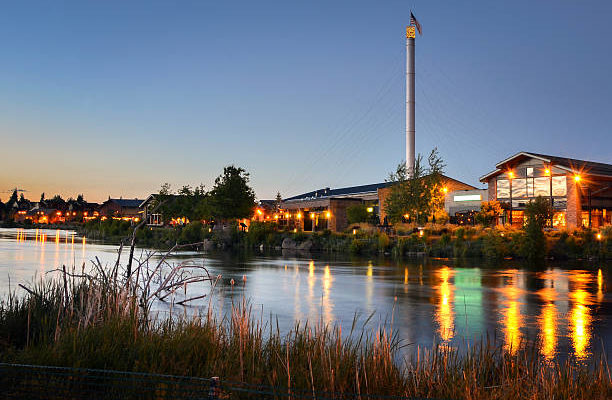 Renovated Old Industrial Buildings at Sunset along the River in Bend, Oregon

BEND, Ore. (AP) — For years, police officers in Bend have referred to a canine officer as “Lil’ Kim.”

Now, as the racial justice protests of 2020 have put pressure on police over their culture and tactics, Bend’s top cop denies his department ever intended to use the name of a famous Black musician for its police dog.

Chief Mike Krantz told Oregon Public Broadcasting that the dog, a Belgian Malinois shepherd repeatedly identified as Lil’ Kim, in official department statements over the years, was not styled after the rapper and icon Kimberley Jones, a multi Grammy-award winning Black woman, who under her stage name Lil’ Kim has sold more than 15 million albums worldwide.

News of the dog’s name change comes after requests from a civil rights group. Krantz denies those appeals caused him to instruct officers on a name change.

“We addressed it previously, internally, and the dog’s name is Kim,” Krantz said. The chief called “Lil’ Kim” the dog’s “nickname,” which he said stems from her petite size relative to other K-9s with the force.

As recently as last month, Central Oregon media outlets reported that Lil’ Kim bit a suspect on the run from Bend police. A week later, on Feb. 28, officials called Lil’ Kim and her handler to help apprehend a domestic violence suspect, according to a police press release.

This month, a Black racial justice advocate asked police to stop using the rapper’s name for their dog. Riccardo Waites said his email conversation with the chief initially stalled over Krantz denying any intentional association.

“Why are you justifying why the dog is called Lil’ Kim, instead of accepting that it’s hurting people in the community?” said Waites, the founder of the Central Oregon Black Leaders Assembly.

One of COBLA’s goals as a nonprofit is to build trust between Black community members and law enforcement, Waites said. On March 15, he sent Krantz an email explaining who the real Lil’ Kim is, and why it’s insensitive for a police dog to share that name.

“While it may appear a small or inconsequential matter to some, it is not to those of us who remember how police dogs were used against peacefully protesting civil rights workers and People of Color in the 1960s and are still used as a means of crowd control and intimidation today,” Waites wrote.

Police dogs have long been used as a tool to terrify Black people in America. Images of snarling German shepherds wielded by white police officers became some of the most famous photographs of 1960s civil rights protests in the South.

This week Waites and Krantz met to discuss the issue. Afterward, Waites sent a statement to media outlets praising the police chief for agreeing to change the dog’s name, calling it “a small but critical gesture of good faith.”

But an hour later the police chief replied all: “This information was not verified by me prior to this being sent out. … Please do not use this information as fact,” Krantz wrote.

Krantz moved to Bend from the Portland Police Bureau last year. Kim the canine officer has been with the department four or five years, the chief said. He told OPB the meeting with Waites went well, but: “I just wanted to make sure the information about the dog was really clarified, about the entire history of it.”

Krantz, at times, has had a tumultuous relationship with local social justice groups since he moved to Bend, and has weathered criticism for his handling of protests and political demonstrations.

Waites said that regardless of the intention, the original name was insensitive, and the change should have been publicly acknowledged by the department.

“What makes it even more insensitive is that (the police chief) never acknowledged that it could hurt people, that it would be offensive to some people in the community,” Waites said.

“Not all of those conversations went flawlessly. … But as far as being receptive to what COBLA was offering, every agency except Bend PD was accepting,” Waites said.

Still, he’s not writing off working with Krantz or the goal to build trust with Bend police officers. He aid he is worried about what might happen in response to the trial of Derek Chauvin, a white police officer who knelt on the neck of George Floyd, resulting in the Black man’s death last May. On Monday, Chauvin is set to face a jury on murder charges.

“We have to find a way to have that unity and communication between the community and Bend PD, because the Chauvin case is coming,” Waites said. “This is our chief of police. We want him to empathize with us. We want him to care about us. And if he would have done that, I think this small change would have gone a lot way.”

On Friday, OPB asked Krantz if he thought naming a police dog after Lil’ Kim the rapper would be problematic.

“Although the dog is not named after a musician, it’s important to recognize that some people may assume that or believe that,” Krantz said. “I think in the eyes of some community members there is a connection historically to the use of dogs, specifically on protestors and Black community members, and that, that could bring a fear of canines.”