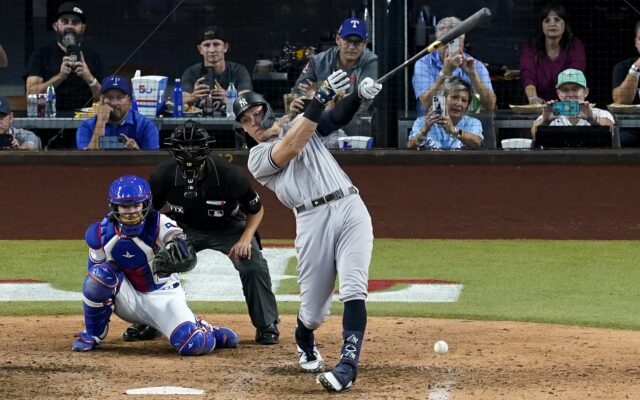 New York Yankees' Aaron Judge follows through on a grounder that led to a force out at second as Texas Rangers catcher Jonah Heim and umpire Gabe Morales look on in the ninth inning of the first baseball game of a doubleheader in Arlington, Texas, Tuesday, Oct. 4, 2022. Kyle Higashioka was out at second on the play for the third out. (AP Photo/Tony Gutierrez)

Judge hit a 1-1 slider from Texas right-hander Jesus Tinoco into the first couple of rows of seats in left field when leading off the second game of New York’s day-night doubleheader on Tuesday.

The 30-year-old Judge had homered only once in his past 13 games.

That was when he hit No. 61 in Toronto last Wednesday to match Maris.

While Maris’ 61 for the Yankees in 1961 had been exceeded six times previously, all were tainted by the stench of steroids.

That includes Barry Bonds’ 73 for the the San Francisco Giants in 2001, though he has denied knowingly using performing-enhancing drugs.