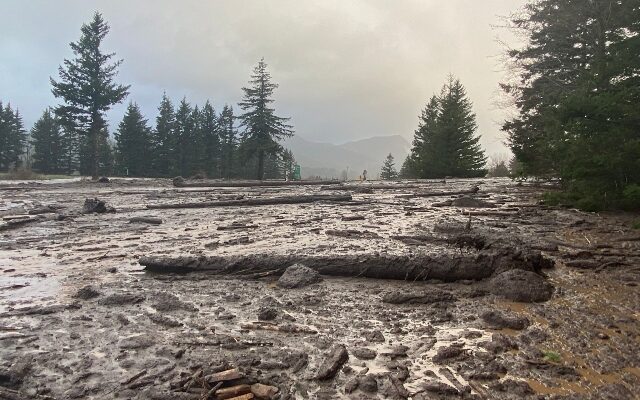 MULTNOMAH COUNTY, Ore. — A woman is missing after a landslide early Wednesday morning buried parts of the town of Dodson, a community about 4 1/2 miles east of Multnomah Falls that is home to about 1,000 people.

Officials believe a vehicle was swept away by the debris flow.  Searchers have been unable to find any heat sources.

At this time, 1 person remains unaccounted for in the Dodson area. It’s believed the vehicle they were driving in was swept away by the debris flow. Firefighters were not able to locate any heat sources using thermal-imaging cameras. It remains too dangerous for physical search. pic.twitter.com/vmv9AHFlQc

The debris is estimated to be ten feet deep in some areas.

Water and mud continue to flow downward across Frontage Road and onto eastbound lanes of I-84. pic.twitter.com/ijb8X9zSz8

A flash flood warning was issued by the National Weather Service.

Residents were urged to leave immediately.

.@NWSPortland has issued evacuation notices, flash flood warning for Dodson. Active landslides are making it difficult for responders to safely access community. Residents, leave by traveling east. All others, avoid the area. https://t.co/P8chvAMC12

First responders say the area is too unstable to send in rescue crews.