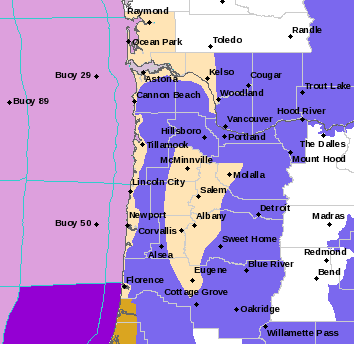 The National Weather Service in Portland has issued a winter weather advisory for our area. It’s in effect from 3 this afternoon to 4 A.M. on Wednesday.

Meteorologist David Elson says downtown Portland may see snowflakes but they’re not likely to stick. “In the Portland area we’re looking at rain at the lowest elevations developing later today, and then continuing through tonight, especially through this evening,” said Elson.

But other spots could get as much as three inches of snow.
“You get up above say about 500 feet or so, we’re expecting it to be mixed with, and then change over to snow.”

That means snow accumulating in the Foothills, the Cascades and the highest elevations of the West Hills, mainly during the late afternoon and evening hours. Elson says low temperatures should hover right around the freezing mark.

Here is the complete notification from the National Weather Service Portland Office: