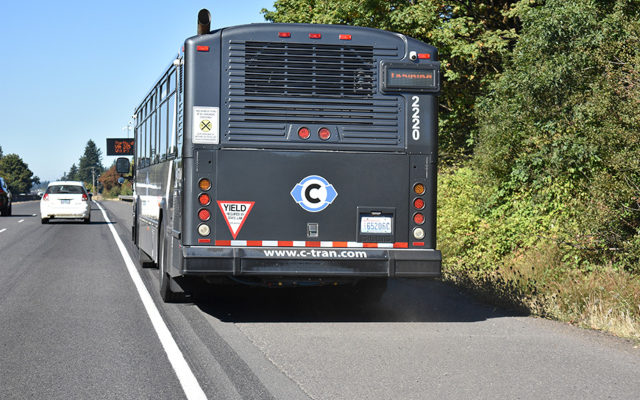 VANCOUVER, Wash. — Monday is the first day that C-TRAN buses can use the shoulder of Interstate 5 or I-205 in Washington and Oregon when traffic slows below 35 miles per hour.

Buses on I-5 southbound from 99th Street to the Interstate Bridge in Vancouver can use the left inside shoulder, while buses on I-205 can use the outside right shoulder in both directions between State Route 14 and Airport Way in Portland.  The lane on I-5 will remain permanent, while on I-205 it’s a one-year pilot project.

Buses are not allowed to go more than 15 mph faster than traffic and priority use of the shoulder is maintained for emergency vehicles, crashes and breakdowns.

This is new to Oregon, but not to Washington.  C-TRAN buses have been operating on the shoulder of State Route 14 between I-205 and Southeast 164th Avenue since 2017.

Officials say allowing buses to use the freeway shoulder will allow them to bypass traffic during heavy congestion and keep passengers on time.

In the past few weeks, WSDOT and ODOT crews have updated striping and signage along the designated corridors.