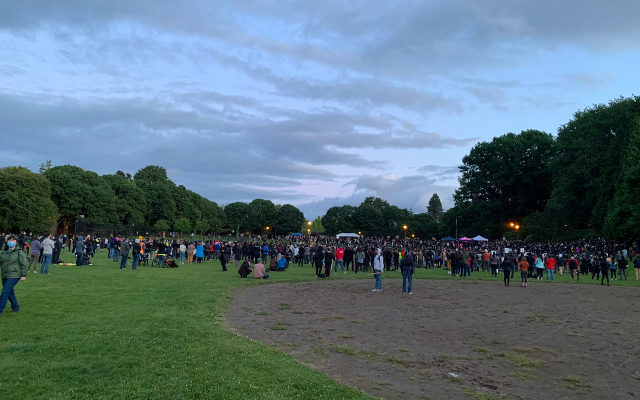 PORTLAND, Ore. — A 10th night of protests in Portland over the death of George Floyd in the custody of Minneapolis Police was again mostly peaceful on Sunday night before taking a violent turn as darkness set in.  At least 20 people were arrested and four vehicles were towed.

Three separate groups gathered in the early evening; one at Revolution Hall, another on the St. Johns Bridge and a third at the Justice Center.

Thousands marched from Revolution Hall to Irving Park where they peacefully rallied for several hours before marching back to their starting point.  Police point out this group has gathered at this spot for six days and managed themselves without violence, vandalism or disruptive behavior.

The second group marched to the Portland Police Traffic Division and then onto the St. Johns Bridge where they blocked traffic for a short while before marching back to the traffic division and dispersing.

Demonstrators started gathering at the fence line at Southwest 3rd and Main outside the Justice Center around 7:00pm.  They would occasionally shake the fence, but the event was not violent for several hours.

Around 11:30pm, police say full beverage containers, glass bottles, hard boiled eggs, rocks and other projectiles were thrown at officers.  The crowd was using sling shots and other means to propel the objects, striking officers a block away.  A paramedic with Portland Fire and Rescue was hit in the stomach with a rock.

Agitators ignored being admonished many times to stay off the fence and not throw items.  A civil disturbance and unlawful assembly were declared around midnight before officers began clearing the crowd.  One person threw a lit molotov cocktail at an officer, but thankfully there were no injuries.

Police say these agitators have not been able to manage themselves, which has required significant city resources and a substantial cost.